Baldness battle heats up as new pill is offered

Baldness battle heats up as new pill is offered 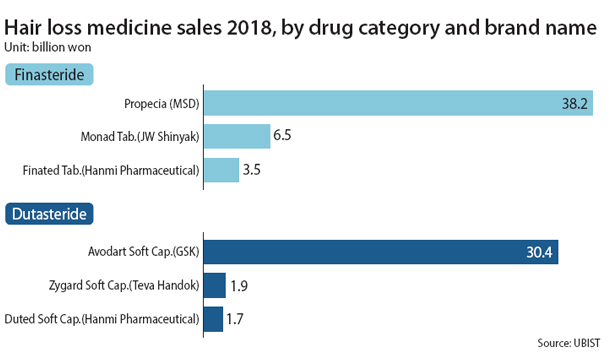 With 10 million people expected to lose hair in Korea, competition to treat baldness is intense.

The battle in the country has much to do with the way the medicine is delivered.

For a long time in Korea, the former was more popular. Sales of finasteride totaled 67.2 billion won ($59.2 million) last year, but the growth rate was only 6.5 percent.

JW Pharmaceutical released a hard pill in 2018 to treat two types of baldness. The active ingredient is dutasteride, which normally does not dissolve in water.

Dutasteride has long had the drawback of sticking in the throat. But the newly-released medicine is soluble in water and is easily swallowed.

This marks the first time for JW Pharmaceutical to offer a medicine for baldness with dutasteride as a hard pill.

JW Pharmaceutical, which is based in Seocho District, southern Seoul, is trying to win over others through contract manufacturing arrangements, a situation makers of finasteride products are watching closely.

“Since the medicine is easier to take and people can split and eat it, sales are expected to increase from now,” said a source from the pharmaceutical industry on Monday.

The existing medicines have side effects, including sleep disorders. Hair loss also returns once the patient discontinues their use.

But interest is steady and competition is intense on a global basis.

Pfizer, the largest pharmaceutical corporation in the world, is developing new medicines for hair loss.

“As an increasing number of young people experience hair loss and [the number of] early treatments through medicine increases, the competition between companies to solve baldness is getting intense,” said Dr. Hwang Jeong-wook, director of Mojelim Plastic Surgery, a clinic which treats certain types of baldness.

According to the National Health Insurance Service on Monday, the number of people who visited hospitals to treat baldness from 2012 through 2016 exceeded one million.

The domestic market for medicine treating alopecia, a type of baldness, is forecast to total 122.8 billion won in 2019, up 12.3 percent year on year. This includes prescription-only medicines.

The market size, when including all type of medicines and shampoos, is estimated to be 4 trillion won annually.

According to the Korean Society Hair Restoration Treatment, the number of people in Korea highly likely to lose their hair in the future totals 10 million.