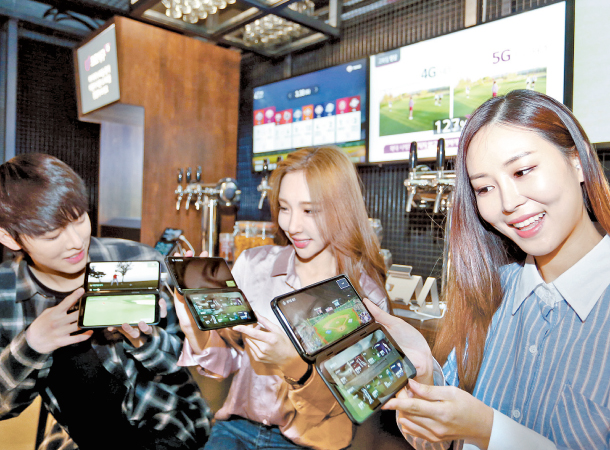 LG U+ opened a popup store in Gangnam District, southern Seoul, to demonstrate the experiences possible with the 5G network. Using the technology, visitors can go on a virtual date with a celebrity and dance, virtually, alongside pop stars.

The store, which will be open through May 31, offers various virtual reality (VR) and augmented reality (AR) experiences. While much offered is already available as downloaded video, it can now be streamed with the 5G network.

LG’s intense marketing push comes ahead of the Friday introduction of the Samsung Galaxy S10 5G - the world’s first 5G smartphone. LG, currently the smallest carrier after SK Telecom and KT, hopes to expand its influence in the market.

With the introduction of the 5G network, the company is aggressively promoting its payment plan for relevant services. The cheapest it offers costs 55,000 won ($49) for nine gigabytes of data at 5G speeds.

Visitors to the virtual store, which is 660 square meters (7,104 square feet) in size, can enjoy dates with celebrities.

In a video featuring Cha Eun-woo from boy band Astro, a viewer is led to a yacht party. There, Cha introduces the viewer to his friends while looking at the date with affectionate eyes. Virtual dates with female stars, like Son Na-eun from Apink, are available.

Visitors can also watch Cirque du Soleil. With the VR gadget on, they can enjoy a 360-degree view of the performance.

Another experience is the dancing zone. When visitors dance in an empty space, they can get a 360-degree view of themselves next to a K-pop star on a mobile screen.

Sports lovers can view a baseball stadium from a bird’s-eye view and also zoom in on players to see their moves more closely during the game.

The technology will come at a price. Around 25 to 30 gigabytes of data are consumed watching VR programming for an hour. That’s three times the nine gigabytes LG offers in its cheapest plan.

But the company hopes to alleviate the burden by making some of its content free.

“[LG U+] will create an ecosystem where we secure more than a thousand AR and VR programs by the end of the year,” said Park Jong-wook, vice president of the mobile service division at LG U+. “We are continuously working on research and development to create a lighter headset.”

Whether the network becomes the company’s new cash cow remains uncertain for now. According to a survey the company conducted of its users late last year, 49 percent of them said they are in no hurry to switch to the 5G network.