Kolon Life Science CEO Lee Woo-seok bows to apologize during an emergency press conference Monday at the Korea Press Foundation in central Seoul. The company suspended the distribution and sale of Invossa and patient recruitment for its Phase 3 clinical trials in the United States after finding a material in the drug not previously disclosed to and approved by the Ministry of Food and Drug Safety. [YONHAP]

Kolon Life Science suspended the distribution and sale of Invossa, a gene therapy drug for arthritis of the knee.

The company held an emergency press conference Monday at the Korea Press Foundation in central Seoul to announce that it is suspending Invossa sales after finding material not previously disclosed and approved by the Ministry of Food and Drug Safety.

It is also suspending patient recruitment for its Phase 3 clinical trials in the United States.

“We are deeply sorry for the trouble we caused to patients and others who have expressed deep interest and support for the product,” said Kolon Life Science CEO Lee Woo-seok at the press conference. 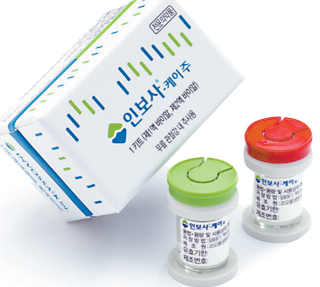 The ministry said in a statement a day earlier that it requested Kolon Life Science to discontinue the manufacturing and sale of Invossa.

As the global population continues to age, Kolon expects gene therapy to be a game changer in the degenerative joint disease market. Invossa, No. 29 on the chronological list of 30 original Korean-made drugs, is the first drug in Korea to use gene therapy to treat osteoarthritis.

Kolon had positive expectations for Invossa as the U.S. Food and Drug Administration (FDA) approved its affiliate, Kolon TissueGene, to conduct Phase 3 clinical trials at 60 major American hospitals last year. But news of sales suspension now puts Invossa at risk of a ban after being commercialized in Korea for 20 months since July 2017.

The drug, which is injected, was approved by the ministry. But Kolon Life Science later discovered that a kidney cell line, which was not mentioned in the submitted data, was included during production of the gene delivery medium. It suspects that the cells used in Korea could be the same as the cells used in the United States.

Shortly after discovery, the company reported the result to the ministry and sent a notification letter to the FDA Saturday. Kolon Life Science decided to halt the distribution and sale of the drug until it receives further updates from the ministry.

Lee explained during the press conference that “technical limitations” in the early 2000s prevented researchers from properly identifying the basis cell for Invossa. It was only after further analysis using more advanced methods this year that Kolon Life Science found the basis cell to be kidney-originated instead of cartilage-originated, Lee said.

The ministry has now banned doctors from prescribing Invossa to patients and requested them to prescribe painkillers and steroids as replacements until it finishes further inspection by April 15. The product is currently supplied to 443 hospitals and clinics across the country.

The ministry concluded that public safety is not an issue as no threatening side effects were reported during the 11 years Kolon Life Science has conducted clinical trials and undertaken sales. The injectable drug was administered to 3,403 patients in Korea since officially being released.

Lee said the company is going to hold negotiations with the ministry after it finishes inspection and meet with the FDA in mid-May to discuss possible continuation of Phase 3 clinical trials.

Despite expecting delays, Lee believes a simple labeling change would be sufficient to re-establish the ministry’s approval of Invossa. Lee said the company does not expect its patients to take legal action against Invossa.

“Safety and efficacy of Invossa remains unchanged,” Lee said. “We will concentrate all our efforts to wrap up this matter quickly. It might take some time, but we will make sure everything is clarified with no more mistakes on our end.”