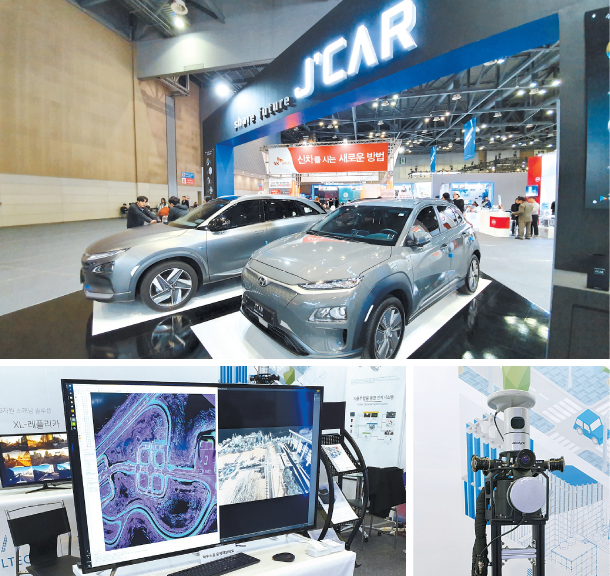 GOYANG, Gyeonggi - While big-name automakers have grabbed the headlines at this year’s Seoul Motor Show, smaller players are also embodying the show’s themes of sustainability and connectivity.

Squeezed in between industry giants, new mobility companies have come out in full force to detail their visions, which range from self-driving technology to pick-up maintenance services.

Using its Replica scanner products, which are composed of multiple cameras, lidars and a GPS system, the company’s mapping software creates a 3-D scan of the environment and provides real-time positioning information.

“There aren’t other companies in Korea that has its own software to analyze mapping data,” said CEO Kim Jae-seung on Monday. “We have technology that quickly and accurately positions the location and an edge in quickly analyzing the environment.”

Demonstrating its system through detailed 3-D images of locations around Seoul such as Gwanghwamun in the city’s center, Kim added that it is currently cooperating on joint research and marketing with leading Chinese sensor manufacturer Hesai, which supplies its products to one-third of the companies in California that have autonomous-driving road-test permits.

The eight-member team has already received investments from Naver and Hyundai Motor last year and is planning to conduct a series A round of funding in the second half of this year. The company will also look to markets abroad with plans to feature its products at the Consumer Electronics Show next year.

“We currently have 135 vehicles in Gwangju and Changwon and are planning to launch services in Seoul next month,” said a press officer from the start-up, who explained that J’Car launched the service because of its belief in an eco-friendly future.

Through the use of eco-friendly vehicles, the service has advantages over established platforms, such as 50 percent discounts in highway toll gate fees and parking fees.

Start-up Carbershop, on the other hand, tries to maximize the mobile ecosystem of the country and reduce the hassle of vehicle maintenance.

With a name that is a portmanteau of car and barbershop, the start-up provides a pickup and return service for vehicle maintenance, such as car washes or oil changes. Currently in beta service in various locations in Samseong-dong, Gangnam District, southern Seoul, the service is expected to launch sometime this month. At one corner of the motor show, the sustainability world section, companies are also featuring products that incorporate hydrogen fuel cells and solar power.

Hylium Industries is showcasing its liquid hydrogen fuel cell drone that can stay in the air for up to five hours. Iljin Precision is displaying a refrigerator van truck that can keep its refrigeration system running even when the vehicle’s engine is turned off. The vehicle is fitted with an energy storage system that is charged by solar panels on the roof to keep goods cold.