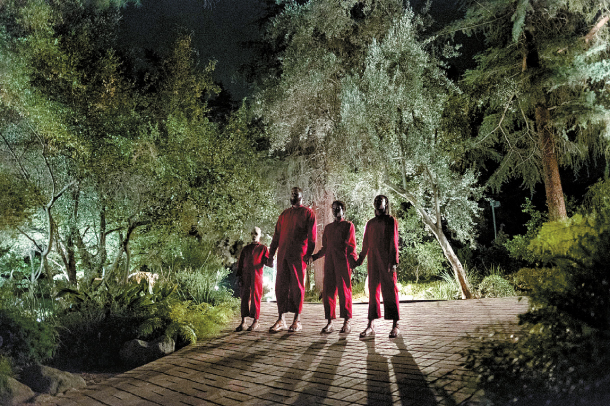 “Us,” a Hollywood horror movie by the actor-turned filmmaker Jordan Peele, took the top position in its debut weekend at the Korean box office while being closely followed by the Korean crime movie “Money.”

The American horror movie, which is expected to be an even bigger international sensation than Peele’s directorial debut “Get Out” did two years ago, attracted 629,000 viewers from Friday through Sunday, while “Money” sold 602,000 tickets in its second week. The accumulated ticket sales for the Korean film reached 2.7 million as of Sunday.

In North America, “Us’’ was bumped to second place by “Dumbo.” Still, “Us’’ added $33.6 million, down only 53 percent, bringing its domestic total to $128.2 million in its second week. The Lupita Nyong’o doppelganger movie cost only $20 million to produce.

“For horror, which generally have the scariest drops in the business, ‘Us’ is really holding in there,’’ Paul Dergarabedian said. “It’s good news for Jordan Peele.’’ 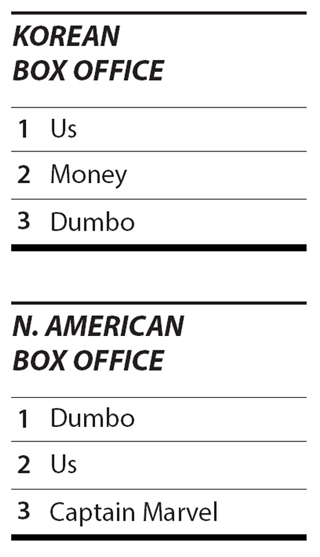 The opening in North America, well above forecasts, had few parallels. It was the largest debut for an original horror film and one of the highest openings for a live-action original film since “Avatar” was released 10 years ago.

Disney’s “Dumbo’’ took third place in Korea in its first week. It sold 176,000 tickets from Friday through Sunday. It isn’t exactly taking flight at the North American box office the way its other live-action remakes of animated classics have.

The Walt Disney Company said Sunday that the Tim Burton-directed film has earned an estimated $45 million domestically from 4,259 locations against a $170 million production budget. It’s less than half of what “Beauty and the Beast,” “The Jungle Book” and Burton’s own “Alice in Wonderland” opened to.

The remake of the 1941 animated film stars Colin Farrell and Danny DeVito. It got mixed to negative reviews from critics and currently has a middling 53 percent on Rotten Tomatoes.

Audiences who did turn out, however, had a different response than the critics and gave the film an A- overall, according to CinemaScore.

Disney has two other high-profile live-action remakes coming out this year with “Aladdin’’ (May 24) and “The Lion King’’ (July 19).

“I don’t think this is a mandate against live-action remakes. But sometimes when you don’t have the reviews, it can affect it,’’ said Dergarabedian, Comscore’s senior media analyst. “For Disney, the bar is set so high. This is just a little speed bump on what is already a spectacular year for Disney.’’

Easing the “Dumbo’’ disappointment, Disney and Marvel’s “Captain Marvel’’ landed in third place in weekend four in North America with an additional $20.5 million. It has now earned over $350 million in North America and is expected to cross the $1 billion mark globally sometime this week.