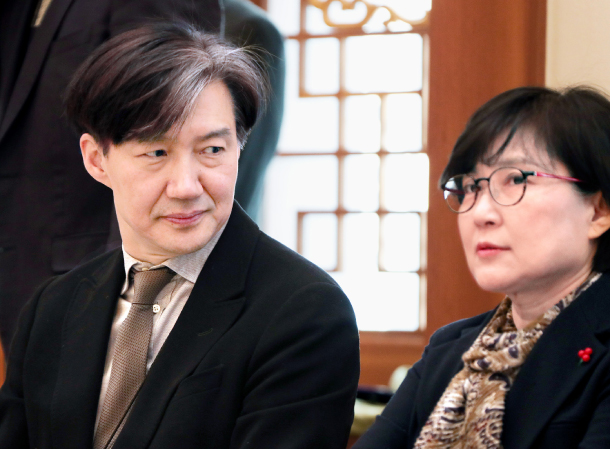 Signs inside the Blue House on Monday indicate that senior presidential aides responsible for nominating and vetting top government officials may be replaced in the wake of recent appointment fiascos.

“It is hard to deny that Senior Civil Affairs Secretary [Cho Kuk] and Senior Secretary for Personnel Affairs [Cho Hyun-ock] are jointly responsible for the botched nominations,” a high-ranking Blue House official told the JoongAng Ilbo on Monday. “I know that Cho Kuk has said he won’t be reluctant to give up his post.”

The Blue House has been resisting the opposition’s growing calls for Cho Kuk and Cho Hyun-ock to be fired for having failed to properly vet minister nominees for the latest cabinet reshuffle.

President Moon Jae-in withdrew his nomination of Cho Dong-ho as science minister on Sunday after it was discovered that Cho attended an international conference organized by an academic group that engaged in deceptive practices.

Earlier in the day, Choi Jeong-ho, Moon’s nominee for minister of land, infrastructure and transport, announced he was voluntarily bowing out after opposition lawmakers accused him of real estate speculation.

It was the first time Moon withdrew a minister-level nomination, though several people have stepped down on their own, including Choi. Conservatives, including the Liberty Korea Party (LKP), said Moon must fire Cho Kuk and Cho Hyun-ock for their repeated failures in nomination and vetting.

Even after announcing Moon’s unprecedented decision to give up on ministerial nominee, the Blue House was adamant that no discussion on holding the two aides accountable had occurred. It also said that confirmation hearings at the National Assembly are a part of the vetting process, so the two senior secretaries cannot be held accountable.

But the mood appears to have changed overnight. In an interview with MBC on Monday, Ko Min-jung, deputy presidential spokeswoman, said, “We are studying the development of public opinions.” She said replacing them was not being considered as of Monday morning.

Ko, however, hinted that the Blue House was mulling whether to reprimand the two aides.

“I wonder if unconditional resignations are the best way to solve the problem,” she said. “I understand that [the president] will listen to various opinions and make a judgment.”

Another Blue House official also said the air has shifted.

“The two aides have served in the senior secretary posts since the launch of the administration, and there are many opinions that the time has come for them to step down,” he said. “It doesn’t have to be replacement, but it is hard for the Blue House to take no action against them.”

Cho Kuk and Cho Hyun-ock are the only remaining inaugural members of Moon’s senior secretariat. As of May, they will have been at their jobs for two years.

Sources at the Blue House said Cho Kuk, even if replaced, must not be seen as being punished because he is tasked with one of the most important projects of the administration - reforming the country’s powerful investigative authorities, including the prosecution.

“Until he produces an outcome, it won’t be easy to replace him,” a presidential aide said.

The ruling Democratic Party (DP) also started defending Cho while stressing the need to learn a lesson from the botched vetting process.

“We’ve had enough experience that the vetting must be done rigorously,” said DP Chairman Lee Hae-chan.

“If anyone demands he resign, despite his consistent devotion to creating a new investigative body for senior public servants and reform the prosecution, they are either anti-reformists or idiots being used by anti-reformists,” Rep. An Min-suk of the DP said. “Cho’s resignation is like giving up on the two reform projects. We must protect him.”

The conservative parties are continuing their pressure on the Blue House to fire Cho Kuk and Cho Hyun-ock for their failures to carefully recommend and vet ministerial candidates.

“They have messed up everything. President Moon must reprimand them and apologize to the people,” LKP Chairman Hwang Kyo-ahn said Monday.

Chairman Sohn Hak-kyu of the Bareunmirae Party also said the confirmation hearing system must be revised.

“No matter what the National Assembly says, the Blue House can just go ahead and appoint the ministers,” Sohn said. “The confirmation hearings, therefore, became the battleground of politicians, while no actual scrutiny is done. The hearing must become legally binding so that the president cannot appoint a minister without the legislature’s endorsement.”

While Moon can appoint nominees without legislative approval, the LKP is adamant that it won’t accept two other nominees, even after the science minister nominee dropped out and land minister nominee withdrew his candidacy.

The LKP particularly opposes Rep. Park Young-sun of the DP, named as the minister of small- and medium-sized enterprises and startups, and Kim Yeon-chul, head of the Korea Institute for National Unification, who is the unification minister nominee.

The National Assembly has until Monday to approve confirmation hearing reports on the five nominees. The approvals are considered the legislature’s endorsements, although Moon can still appoint them without the assembly’s support.

Asked if Moon will push through their appointments, Ko said, “We have no premeditated plan on what to do. When a situation takes place, we will look into the matter from various angles and decide.”

Ko also said it is premature for her to confirm when and what Moon will say about the continuing political controversy over the recent appointment scandals.

Since he took office in May 2017, Moon has rarely reacted when his nominees were criticized. Some nominees stepped down voluntarily after controversies, but Moon still pushed through appointments despite the National Assembly’s refusal to endorse confirmation hearing reports.

Speculation is growing that Moon’s decision to withdraw the science minister nomination was possible because the presidential chief of staff has changed.

“Moon was tough toward appointment controversies when Im Jong-seok was the chief of staff,” a Blue House official said. “At the time, his approval rating was extremely high, and [Im] was determined to maintain the administration’s philosophy and made decisions that could be mistaken for high-handedness.”

Sources said Chief of Staff Noh Young-min held an emergency meeting of senior secretaries over the weekend, listened to their opinions and told Moon that it is necessary to withdraw Cho as science minister nominee. Moon reportedly respected Noh’s decision and immediately announced the withdrawal.