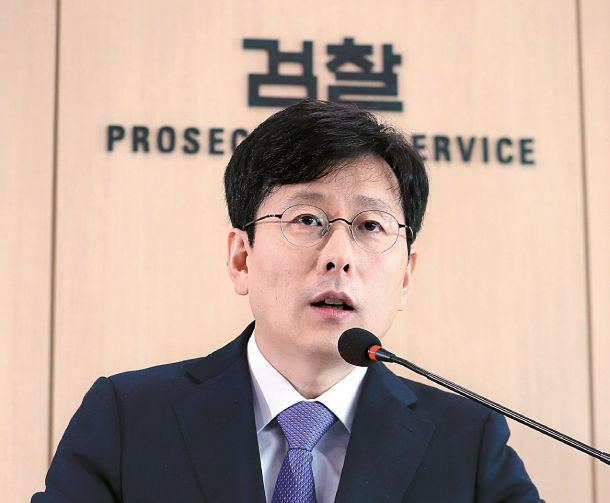 Yeo Hwan-seop, the head of a new probe reinvestigating a sex and bribery scandal involving a former vice justice minister, briefs reporters about his investigation plans on Monday in eastern Seoul. [NEWS1]

The head of a new probe team tasked with reinvestigating a sex and bribery scandal involving a deputy justice minister from the previous Park Geun-hye administration vowed Monday to handle the case by the book.

Yeo Hwan-seop, chief prosecutor of the Cheongju District Prosecutors’ Office in North Chungcheong, told reporters as he walked into his temporary office that he would “fully” inform the public about the results of the probe so no allegation is left unanswered.

Monday was the first time Yeo entered his office in the Seoul Eastern District Prosecutors’ Office after the prosecution announced last Friday that a probe into ex-Vice Justice Minister Kim Hak-eui officially launched. That announcement came after a commission under the Justice Ministry that's digging up past cases recommended on March 25 that prosecutors reopen their investigation into the scandal from years ago.

When asked what he did over the weekend, Yeo replied he went through papers and made decisions on who to add on his team, though further details were not given. Yeo’s probe team will use the 11th and 12th floors of the Seoul Eastern District Prosecutors’ Office. This office is above a fact-finding group within the commission digging up past cases, which is separately probing Kim’s scandal as well as several other issues on the third floor of the same building. Both teams are expected to share information on the case.

Kim served as the No. 2 official in the Justice Ministry for six days during the Park Geun-hye administration in March 2013. He resigned over allegations that he attended a number of parties that were thrown by a contractor who hired women to have sex with high-profile figures to gain business favors. That scandal evolved into a drug-and-rape case when a woman claimed that she was drugged, raped and videotaped by Kim and the contractor, Yun Jung-cheon.

Yeo’s new prosecutorial probe is expected to reveal why the investigation into Kim failed to yield any charges in the past despite a litany of evidence presented by the police at the time.

Yeo’s probe is expected to first determine whether Yun bribed Kim between 2007 and 2008. If it turns out Yun gave Kim 100 million won ($88,100) or more, Kim could be charged with violating Article 4 of the Act on the Aggravated Punishment, Etc. of Special Crimes, which carries a statute of limitations of 15 years.