Counting down to Gwangju FINA

Counting down to Gwangju FINA

The 100-day countdown to the first International Swimming Federation (FINA) championships to be hosted by Korea will begin today. 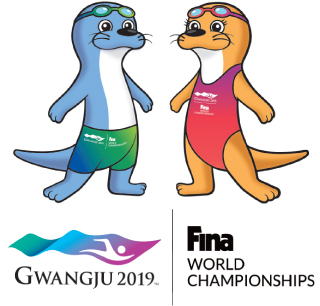 The biennial FINA World Championships will be held in Gwangju, 330 kilometers south of Seoul, and Yeosu, South Jeolla, from July 12-28. It will be the 18th edition of the world swimming body’s signature event and the first to take place in Korea.

In exactly 100 days from Wednesday, the world’s largest swimming festival will open with a ceremony set to begin at Gwangju Women’s University Universiade Gymnasium in Gwangju at 8 p.m. under the theme of “fountain of light.”

For a period of 17 days, about 7,000 aquatic sports athletes from about 200 countries worldwide will compete for 186 gold medals in 76 events of six disciplines - swimming, diving, water polo, artistic swimming, open water swimming and high diving.

As 43 percent of tickets to the 2020 Tokyo Olympics will be allocated at the Gwangju swimming championships, the participating athletes are expected to compete very fiercely.

In particular, the organizing committee of the Gwangju championships has increased the capacity of the Nambu University Municipal Aquatics Center from 3,393 seats to 10,648 seats to use it as the main venue.

Following the FINA championships for elite aquatic sports athletes, the FINA World Masters Championships will take place at the same venues in Gwangju and Yeosu from Aug. 5-18.

About 8,000 aquatic sports enthusiasts older than 25 years will compete in 63 events of five disciplines - swimming, diving, water polo, open water swimming and synchronized swimming - for 14 days. Starting in 2015, the masters competition has been held jointly with the FINA World Championships.

The two championships’ events are expected to bring about 15,000 athletes and officials from about 200 countries across the world to Gwangju, organizers said.

The FINA World Swimming Championships is considered one of the world’s top-five mega sports events, along with the Summer and Winter Olympics, the FIFA World Cup and the World Championships in Athletics.

If the FINA championships is successfully hosted by Gwangju, Korea will become the world’s fourth country to host all of the top-five mega sports events after Germany, Italy and Japan.

Gwangju will be the third Asian city to host the FINA championships after Japan’s Fukuoka in 2001 and China’s Shanghai in 2011.

The organizing committee of the 2019 FINA World Championships has selected “Dive into PEACE” as its slogan in a bid to promote peace, eco-friendliness and culture through a low-cost and high-efficiency event.

It will push to invite North Korean athletes, artists and cheerers to participate in the Gwangju championships based on the improving inter-Korean relationship.

The committee said it is awaiting a response from Pyongyang to its earlier proposal to form a joint inter-Korean team in women’s water polo and to hold a performance of North Korean artists in Gwangju.