Kang fails to get a hit in return to PNC Park

Kang fails to get a hit in return to PNC Park 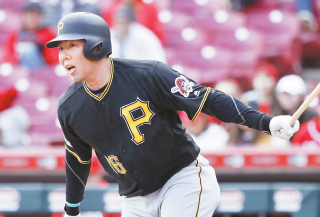 Kang Jung-ho of the Pittsburgh Pirates hits a double during a game against the Cincinnati Reds at Great American Ball Park in Cincinnati on Sunday. [GETTY IMAGES/YONHAP]

Kang started on the bench in the Pirates’ home opener of the 2019 Major League Baseball season against the St. Louis Cardinals at PNC Park in Pittsburgh on Monday after Colin Moran took over his third base position.

But with the game tied at 4-4, the 31-year-old Korean came on in the top of the eighth inning to play third base, with Moran switching to first base.

It was Kang’s first appearance at PNC Park since Sept. 29, 2016, when he played against the Chicago Cubs.

Kang missed the entire 2017 season while dealing with legal problems in Korea.

He was arrested in Seoul after leaving the scene of a drunk driving accident in December 2016 and was slapped with a suspended jail term the following spring.

Unable to secure his U.S. work permit, he sat out all of 2017 and only appeared in three big league games away from home in 2018.

After Moran bashed a solo run in the bottom of the eighth and made the score 5-4, Kang made his home plate appearance against the Cardinals’ reliever Mike Mayers but flew out to center.

The Cardinals later leveled the score in the top of the ninth and sent the game into extra innings. In the bottom of the 10th, Kang faced Jordan Hicks, but he struck out on three pitches.

With the latest performance, Kang’s batting average went down to .222. The Pirates went on to lose the game 6-5.

Meanwhile, Choi Ji-man of the Tampa Bay Rays had a multi-hit performance in his club’s 7-1 win over the Colorado Rockies at Tropicana Field in St. Petersburg, Florida.

Batting third and playing first base, Choi went 2-for-4 and scored one run. This is the first time that Choi, who made his big league debut with the Los Angeles Angels in 2016, has had two consecutive multihit games in the majors. He previously produced two hits against the Houston Astros on Saturday.

Elsewhere, Texas Rangers’ veteran Choo Shin-soo went silent in his club’s 2-1 loss to the Astros at Globe Life Park in Arlington, Texas. He started as a designated hitter but went hitless in his four appearances.

Choo only has one hit in his 10 at-bats this season.