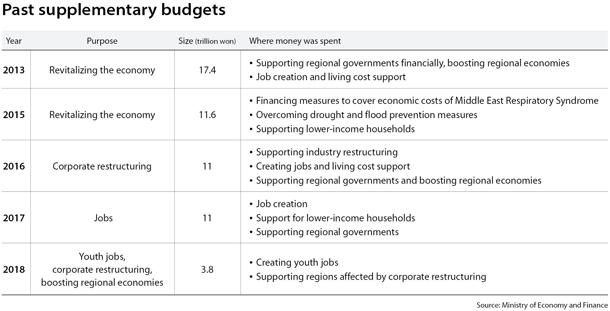 The Moon Jae-in government announced it will propose a supplementary budget this month to boost the economy and tackle fine-dust pollution.

On Tuesday, the Blue House and the ruling Democratic Party reached an agreement to push for the extra spending.

The meeting was the third between the Moon government and the ruling party this year.

“As advised by the International Monetary Fund [IMF] on the subject of creating a supplementary budget considering the downside risks, we will submit our proposal by the end of April,” Lee said.

The IMF, in concluding its Article IV Mission in March, said that while it is feasible for Korea to achieve its target of 2.6 percent to 2.7 percent growth this year, it needs a supplementary budget of more than 0.5 percent of the nation’s gross domestic product, or 8.9 trillion won ($7.83 billion).

Hong Ihk-pyo, senior press officer for the Democratic Party, said the ruling party and the government have agreed on the necessity of drawing up the supplementary budget not only to pre-emptively address economic weakness but to also fight air pollution, which has reached disaster levels and is threatening the health of the public.

The budget will be used to develop a system that will measure fine dust scientifically and also develop infrastructure that will reduce the dust levels.

Last month, the Environment Ministry announced projects including an outdoor air purifier that can be installed on the rooftops of public buildings, as well as in subway station ventilation.

Although the size of the budget has yet to be confirmed, speculation suggests it might be around 5 trillion won.

The prime minister, while meeting with reporters last week during his visit to China, said that while the government has already started preparing the supplementary budget, it wouldn’t be easy to come up with one as large as that proposed by the IMF.

If the government draws up the supplementary budget, it will likely happen after President Moon returns from his two-day trip to Washington on April 10.