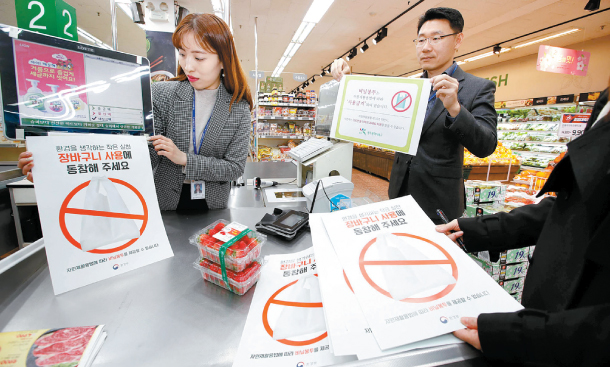 Employees in a retail store explain a regulation that bans the distribution of plastic bags. The regulations went into full effect Monday. [YONHAP]

Restrictions on big retailers offering plastic bags went into full effect Monday, and the public response has been generally favorable except for older customers.

After three months of testing, the Ministry of Environment began to fine certain retailers up to 3 million won ($2,700) if they are found to have offered plastic bags. The move was part of the government’s efforts to promote recycling and save resources.

The retailers can sell customers recycling bags to carry their groceries.

Customers’ responses to the regulation were generally positive, with many welcoming the change.

“I expected to receive complaints, but I was surprised to find that most shoppers willingly embraced the change,” said a vegetable seller at a department store in western Seoul. “When I tried to explain the ban on plastic bag usage, many of them said they were aware of the change due to repeated media exposure.”

A source from the industry attributed discount marts’ earlier adoption of restrictions of plastic bags since 2017 as the reason people reacted so positively.

But not everyone was happy with the regulation.

“Older people generally don’t seem to be happy with the change,” said another worker in the fresh produce section at the department store. “On the first day, some of them became angry and yelled [at us] for not handing out plastic bags.”

There’s also some confusion about plastic bags that are allowed.

Plastic bags can be used to package food that can leak like fish, meat or tofu. Items that can melt such as ice cream or mud-covered vegetables are also exempt from the regulation. But stores are offering different exceptions to different items.

A shopper who was packaging a bunch of bananas with a plastic bag at a discount mart in western Seoul was told not to use the bag.

At another retail store in western Seoul, workers were freely handing out plastic bags to shoppers who were trying to purchase bananas.

“The guidelines we received from the government aren’t very specific yet,” said a source from the industry. “There are discussions [among industry insiders and the government] on specifying which items to offer exemptions, but until then, it seems possible for different operators to offer slightly different exemptions.”