Bolbbalgan4 continues its youthful tradition: On latest EP, the duo captures growing up like only they can

Bolbbalgan4 continues its youthful tradition: On latest EP, the duo captures growing up like only they can 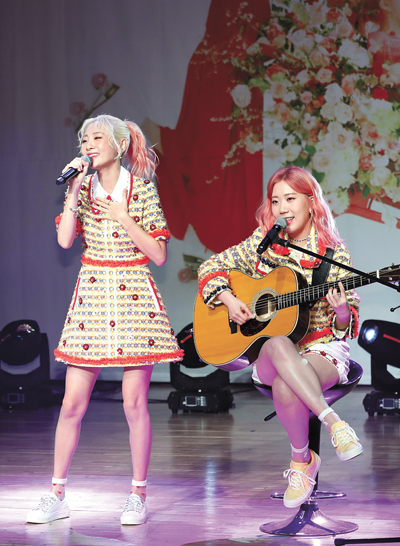 Indie duo Bolbbangan4, or BOL4, performs its song “Bom” at a showcase for its latest EP “Puberty Book1 Bom” held at Ilchi Art Hall, southern Seoul, on Tuesday. At left is vocalist An Ji-yeong and at right is guitarist and songwriter Woo Ji-yun. [NEWS1]

It’s no easy task for an indie band to appeal to an audience accustomed to the flashiness of K-pop, but there’s one act that has done just that. Female indie duo Bolbbangan4 - or BOL4 - has captured both the hearts and ears of K-pop listeners with a streak of hit songs starting in 2016 with “Galaxy.” Known for vocalist An Ji-yeong’s unique voice and guitarist Woo Ji-yun’s songwriting skills, they’re back again to start the spring with a new five-track EP titled “Puberty Book1 Bom,” which was released through local music streaming services on Tuesday 6 p.m.

The band’s full name in Korean - bol bbalgan sachungi, which means “Red-cheeked puberty” - has been the dominant theme of the group’s music since the beginning of their career and a representation of the adolescent pureness the two girls express through their songs. This EP is no exception, according to An.

“The album is called ‘Puberty Book1 Bom,’ [bom means spring in Korean], which gives off a spring vibe. People say that young people going through puberty are like flowers in the spring, and that’s what I tried to express with the songs. If the previous albums were about writing down everyday emotions in a diary, this album is a compilation of those entries in a single book,” said An.

“Puberty Book1 Bom” is the duo’s biggest project since their last six-track EP “Red Diary Page 2,” which was released last May. That EP was hugely successful, with the energetic lead track “Travel” getting listeners into the mood to travel.

“We’ve been taking time off for about a year, traveling and resting,” said An. “And having done that, preparing for this album came so smoothly. We had fun while doing it, which is why we look forward to it as well.”

The two 24-year-olds made their first TV appearance in 2014 through cable channel Mnet’s audition program “Superstar K6,” in which An and Woo flaunted their talent along with two other instrumentalists. The then-quartet first introduced themselves as a folk band that came together at a high school in the mountainous Gangwon, and appealed to viewers with their young and fresh style of music by proving that folk remakes of pop songs could be just as catchy as the originals.

Its latest release is no exception, with all the songs written by Woo and topped off with An’s unique voice.

Though the duo’s debut track “Fight Day” (2016) wasn’t a hit, the songs that followed such as the aforementioned “Galaxy,” “Tell Me You Love Me” (2016) and “Some” (2017) were more than enough to get the listeners hooked on BOL4. With such a distinct sound, the duo is known for not featuring other artists on their songs, which is not going to change in the near future, according to An.

“We did try once this time to have someone else feature in one of our songs. But the conditions did not allow it to happen, and we decided that it might just be better for us two to do it. I think that it will just be the two of us for the time being.”

The duo liked all of the songs on the EP so much that they couldn’t decide on a single lead track, so they chose three: “Bom,” “Stars over me” and “Mermaid.” Their sound may not be as groundbreaking as it once was, but listeners will still find themselves tapping their feet to the songs.

“We do try to have something new with each new song,” said An. “But if our music feels the same, I think that may be because our characteristics are so strong. But, I think we have been making something fun and fresh for listeners with each new work.”

And this time, there’s a particular song that will give listeners the unexpected twist they may need, according to An.

“Some of you may know that I really like traveling. I think I went on nine trips just last year, and one of them was to Seattle. That’s where I wrote the song, ‘Seattle Alone.’ The song compares the emotions of how it feels to go and leave somewhere to the love between a man and a woman. It’s totally different from the songs that we’ve been doing in the past; it’s very synth-heavy and dreamlike,” said An.

The duo also announced their plans for a spring concert, asking for support from their fans.

“This will be our fourth solo concert,” said Woo. “It’s going to be held on May 4 and 5 at the Blue Square Hall [central Seoul]. It will be a chance for people to hear songs from the past, and also see special performances that we will prepare just for the concert.”

An added, “We’ve taken a year off, and it’s been a year since our last concert. So we’re planning on hitting the road more and seeing our fans in person.” As a part of their plans to see their fans more in person, the duo promised that they will hold surprise busking sessions in the streets, as well as additional concerts to come later in the year. The duo hopes that this spring will be special and that people will have a good time while listening to their new songs.

“We hope that some day, our name pops up into people’s minds every spring,” said Woo.