KT unveiled an unlimited data plan for 5G phone users on Tuesday, throwing down the gauntlet as the first mobile carrier in the world to put a price on uncapped 5G data and sparking a war among local telecoms companies desperate to attract early adopters of the new high-speed network.

Unlimited means that neither the amount of data nor its network speed is in any way capped.

LG U+ unveiled three 5G phone plans ranging from 55,000 won to 95,000 won earlier last week, but did not include an unlimited plan.

KT named its series of unlimited plans “SuperPlan” and categorized them into basic, special and premium options based on the benefits aside from data offerings.

The 80,000 won basic plan offers free data roaming in 185 countries at 100 kilobits per second speeds, which is not super-fast but fast enough for simple chatting on apps like KakaoTalk, according to KT.

For subscribers of the 100,000 won special plan and 130,000 won premium plan, KT offers VVIP membership benefits. The membership level, newly created in time for 5G commercialization, offers a maximum of 88,000 won worth of discount benefits at restaurants and airport lounges per month to its members. The two plans could be useful for customers with second devices. They will be able to use one more internet-connected device like a smart watch or tablet PC without a separate monthly phone plan. 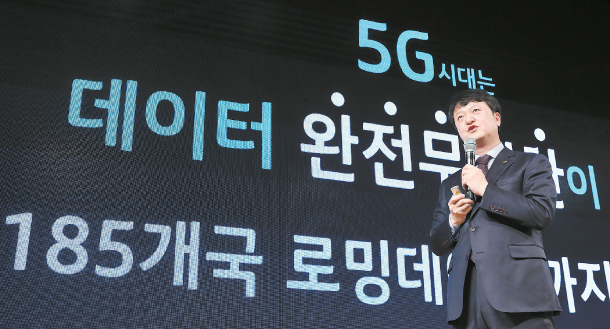 SuperPlan Premium may be especially attractive to frequent travelers. It is the only plan among the three that offers free roaming data at 3 megabits per second speeds, enough to stream a high-definition video, according to KT.

The carrier also introduced one budget phone plan that costs 55,000 won called 5G Slim. The plan offers 8 gigabytes of data per month. After consuming all the data, the internet speed will slow down to 1 megabit per second, from 5G’s roughly 1 gigabit per second speed.

For the same price, however, LG U+ offers 9 gigabytes of data at 5G speeds before slowing down to 1 megabit per second speed.

“5G services are welcomed by heavy data users and our goal is to make them use the data they need seamlessly,” said Lee Pil-jai, senior executive vice president of marketing at KT, during a press conference held Tuesday in Seoul.

When asked whether offering unlimited data to 5G phone users would result in deteriorated quality in service for other users due to heavy traffic, Oh sung-mok, president of KT’s network division, said the company “has set up enough infrastructure to meet the needs of early 5G service users,” adding that each 5G base station can handle about five times more data compared to stations for 4G LTE.

According to Oh, KT will start with 30,000 5G base stations when the network is officially launched on Friday, claiming that will be the largest 5G network in the country.

From Friday, the carrier will open an online site with a map that shows daily updates on 5G coverage by KT.

Oh declined to say when full nationwide coverage of 5G will be realized, however, said it will probably be in the next “one or two years.”

While LG U+ and KT have all unveiled their phone plans and major marketing strategies, SK Telecom is due to introduce its plans today. SK Telecom’s plans are likely to range from 55,000 won to 125,000 won, according to industry sources Tuesday.