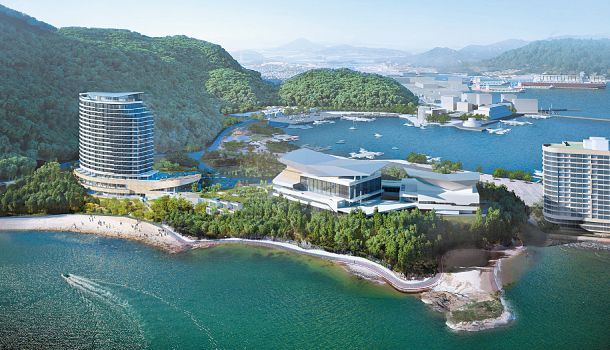 TONGYEONG, South Gyeongsang - Beethoven’s famous “Symphony No. 5,” also known as “The Destiny Symphony” resonated from the Tongyeong Concert Hall on Friday evening to kick off the 10-day classical music festival in this southern coastal city.

“Symphony No. 5” was written between 1804 and 1808, when Beethoven was increasingly suffering from hearing loss. He was determined to complete the composition and not let his hardship frustrate him. In a letter he wrote while working on the piece, he said he would “seize Fate by the throat; it shall not bend or crush me completely.”

Such determination, according to the festival organizers, is similar to that of the Korean composer and the event’s inspiration Isang Yun (1917-95), who did not compromise his principles and his passion of music despite being falsely accused as a North Korean spy and being tortured and threatened by the South Korean government.

Since next year marks the 250th anniversary of Beethoven’s birth, the international music festival thought it should get a head start in celebrating by kicking off the festival with Beethoven’s “The Destiny Symphony.”

The opening concert performed by the Lucerne Symphony Orchestra under the baton of Michael Sanderling on March 29 was a sold out performance. The audience was filled with both local and international music lovers, many of whom visit the festival annually.

“The orchestra performed familiar pieces that I have heard so many times,” said Kang Min-ji, 39, who visited the festival from Gimpo, Gyeonggi. “But it was nothing of the kind I’ve heard. It was definitely worth the five-hour drive.”

Kang’s husband Moon Chang-seob, 41, says he loves visiting the festival annually because he can listen to classical music, as well as enjoy the beautiful coastal scenery. Unlike previous years, the cherry blossoms were in full bloom this year, making the entire trip enjoyable, Moon added.

Meanwhile, the festival will run until Sunday and more of Yun’s compositions are set to be performed.

On Thursday at 7:30 p.m., the Korea Symphony Orchestra will perform his “Symphony No. 3” (1984) under the baton of Chung Chi-yong. It is a powerful piece with an enormous crescendo.

At 9:30 p.m. on Thursday, soprano Suh Ye-ree will be holding a recital. She’ll be singing Yun’s early songs “The Letter,” “The Wayfarer,” “Traditional Attire,” “Hommage to Chungmu,” “The Swing,” and “Misty Moon,” and will be accompanied by Holger Groschopp on the piano.

On Friday at 7:30 p.m., the Tongyeong Festival Orchestra will perform Yun’s “Fluktuationen” (1964) under the baton of Alexander Liebreich. The piece is one of Yun’s representative masterpiece of the ’60s.

Finally, on Sunday at 11 a.m., the Hong Kong New Music Ensemble will perform Yun’s “Te ile dich Nacht” (1980) under the baton of Lio Kuokman. Yun used three poems by Nelly Sachs for the song’s lyrics, which will be performed by soprano Suh.

For more information about the festival, visit timf.org.