TONGYEONG, South Gyeongsang - A woman drifts into the shoreline at night. When she regains consciousness, she quickly becomes weighted with sorrow after she realizes that she has lost her younger brother during the journey and does not know where to go next. Her name is Helen and she is a refugee from the Middle East who is lost at sea. Lady Shizuka, one of the most well-known spirits in Japanese history, appears before Helen, telling her that she wants to help.

This is the beginning of the opera “The Maiden From the Sea,” which had its Asian premiere on Friday night at the Black Box theater abutting the Tongyeong Concert Hall in Tongyeong, South Gyeongsang, and opened up this year’s Tongyeong International Music Festival. The opera, which is in the style of Noh, a form of traditional Japanese musical drama, premiered in Paris in 2017.

The story freely bounces between East and West, just like its music, which was written by Japanese composer Toshio Hosokawa. The opera does not use any Japanese instruments, but instead has Western instruments making the sounds of the East - similar to the style of Korean composer Isang Yun (1917-95), whose music embodies the connection between traditional and modern music.

According to organizers, this is why the piece was selected as one of the opening works of the festival, which was created to pay tribute to Yun, its hometown hero. In fact, Hosokawa was one of Yun’s students.

Hosokawa is currently acclaimed as one of Japan’s best composers and is deeply rooted in the traditions of his mentor. His first encounter with Yun was in 1974, when he was 19 years old. After listening to Yun’s music at a concert in Japan, Hosokawa said he decided to become Yun’s student and went to Germany, where Yun was residing.

“He was my teacher,” said Hosokawa who visited Tongyeong for the festival. “But our relationship was more like father and son.”

“He talked a lot about his hometown Tongyeong,” he added. “So, I’m deeply moved to be here again, where he finally rests in peace.” 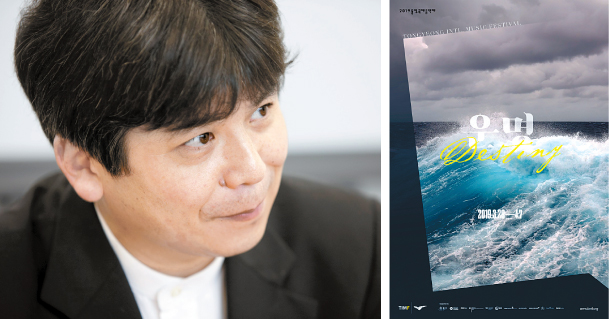 Left: Japanese composer Toshio Hosokawa, the composer behind “The Maiden From the Sea,” is one of Isang Yun’s best students. Right: The poster for this year’s Tongyeong International Music Festival. [TONGYEONG INTERNATIONAL MUSIC FESTIVAL]

Yun was an advocate for Korean reunification and spent his early life opposing the Japanese during World War II. After the war, he traveled to Europe to study music. While living in Berlin during the ’60s, he came in contact with North Koreans, and his interactions with them led the Korean Central Intelligence Agency (KCIA) to believe he was a spy. He was forcibly taken to South Korea, where he was tortured, threatened and sentenced to life in prison. A petition signed by over 200 artists around the world forced the South Korean government to release him, and, in 1969, Yun was freed and returned to West Germany where he was eventually buried. But last year, he returned to Korea upon his wife’s request and his ashes were buried on a cliff overlooking the sea next to the Tongyeong Concert Hall. Yun’s wife said it was his wish to be buried on a cliff in Tongyeong overlooking the sea.

“I think I knew my teacher pretty well,” said Hosokawa, “but he was never really that political. It’s quite sad that he’s still embroiled in controversy over here.”

Hosokawa explained that Noh usually tells a story of spirits that could not escape from tragic situations.

“I tried to express the tragedy everyone has in their hearts through the Asian Noh and modern music of the west,” said Hosokawa. “The root of my music is my teacher’s music.”

“He didn’t like technical music that did not come from the heart,” Hosokawa said. “I visited him once a week with many compositions and he knew intuitively which ones were written with my heart and which ones weren’t. If it wasn’t for him, I don’t think I could’ve become a composer.”

The festival runs until Sunday and several more works of Hosokawa’s pieces will be performed. The Arditti Quartet will perform his “Landscape I” (1992) and “Blossoming” (2007) on Wednesday and Thursday, while the Hong Kong New Music Ensemble will stage his “Drawing” (2004) on April 7. All three pieces will be making their Korean premiere.