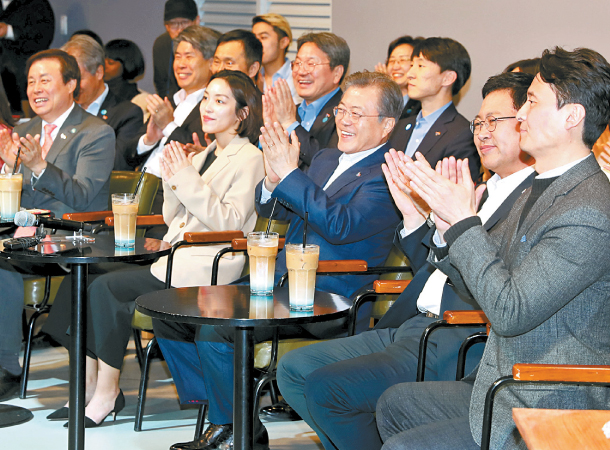 President Moon Jae-in is expected to appoint three minister nominees before leaving for the United States next week, despite conservative politicians’ fierce protest against two of his candidates.

Moon asked the National Assembly to send confirmation hearing reports for three nominees, whom the lawmakers had not endorsed before the deadline on Sunday, Han Jung-woo, deputy presidential spokesman, said Tuesday. The request indicates that Moon is starting the process to formally appoint his nominees, including two particular candidates that the main opposition Liberty Korea Party (LKP) adamantly opposes.

The LKP particularly rejects Rep. Park Young-sun of the ruling Democratic Party (DP), named as the minister of small- and medium-sized enterprises and start-ups, and Kim Yeon-chul, head of the Korea Institute for National Unification and unification minister nominee.

It opposes Park over corruption suspicions and Kim over controversial, pro-North Korea remarks from the past.

While the lawmakers’ conclusions in the reports have no power to stop Moon from appointing his nominees, their opinions serve as political pressure.

Even if the legislature does not send the reports, Moon can still finalize the appointments. Since he took office in May 2017, Moon has appointed eight minister-level officials without receiving reports.

Asked if the president will take steps to appoint his nominees before his trip to the United States, Yoon Do-han, the Blue House senior secretary for public relations, said, “You can understand it that way.”

Speculation is high that Moon will appoint the three ministers with or without the confirmation reports as late as Monday. A cabinet meeting is scheduled for Tuesday, and Moon leaves for Washington the next day for a summit with U.S. President Donald Trump.

Moon withdrew his nomination of Cho Dong-ho as science minister on Sunday after it was discovered that Cho attended an international conference organized by an academic group that engaged in deceptive practices. Earlier that day, Choi Jeong-ho, nominee for minister of land, infrastructure and transport, announced he was voluntarily bowing out after opposition lawmakers accused him of real estate speculation.

Of the remaining candidates, the National Assembly approved a report for Park Yang-woo, nominee for the minister of culture, sports and tourism, on Monday.

The lawmakers said in the report that Park is unfit to serve in the post, but the opinion is non-binding.

Earlier in the morning on Tuesday, the National Assembly sent a confirmation hearing report for Moon Seong-hyeok as the nominee for minister of oceans and fisheries. The report stated approvals and objections by lawmakers.

The National Assembly is expected to send a report on Rep. Chin Young as the nominee for interior and security minister later this week.

The ruling Democratic Party (DP) also made clear that it will defend the three remaining nominees. “It is the party’s stance that we won’t back down,” said Rep. Hong Ik-pyo, spokesman of the DP. “No suspicions were actually substantiated against Park Young-sun and Kim Yeon-chul.”

The LKP continued to demand Park and Kim drop out. It said it won’t make a deal to allow their appointments just because two nominees failed last week.

“Moon must withdraw the nominations of Park and Kim,” said Rep. Na Kyung-won, floor leader of the LKP. “Or else, the administration must not expect our cooperation.”

The LKP also issued a statement on Tuesday that if Moon appoints Park and Kim, it will be a declaration of war against the people. It said that the two have failed to pass the confirmation trials because they lack ethics and competence. It also demanded Moon fire two senior aides responsible for recommending and vetting them.