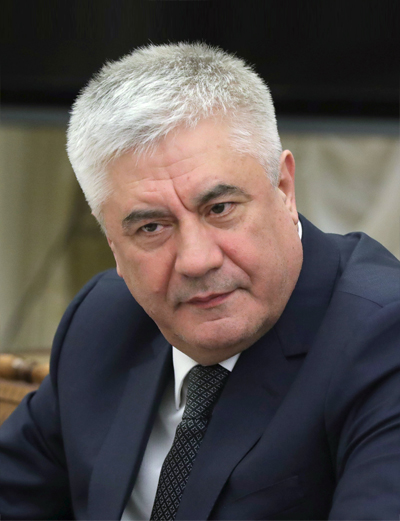 Signs are growing that North Korean leader Kim Jong-un may visit Russia very soon, perhaps as early as this week, as the North’s state media reported on the Russian interior minister’s arrival in Pyongyang on Tuesday.

Vladimir Kolokoltsev arrived in Pyongyang accompanied by a party of officials on Monday, according to the Korean Central News Agency, one of the North’s leading state mouthpieces. Details on the reasons or the duration the visit were not given, though it is likely to center around Kim’s rumored first trip to Moscow.

The visit by Kolokoltsev, the head of the Kremlin’s homeland security apparatus, is only the latest in a string of visits by Russian officials to North Korea. It comes days after lawmakers from the Russian legislature’s upper house, including Sergey Kislyak, Moscow’s former ambassador to the United States, stayed in Pyongyang for five days. The visit was billed as a celebration of the 70th anniversary of an economic and cultural agreement between the two countries.

Early last month, the Kremlin’s press secretary announced that a summit between Kim and Russian President Vladimir Putin was indeed on the agenda, and that the details of the meeting would be arranged through diplomatic channels.

Kim Jong-un’s chief aide for protocol, Kim Chang-son, undertook a seven-day visit to Russia last month, spending time in Moscow and the country’s eastern port city of Vladivostok in what was widely speculated to be preparation for Kim’s trip to Russia.

Moscow had tried to increase its influence vis-a-vis North Korea since Pyongyang began its overtures to the United States and South Korea last year. In a visit to the North in May, Russian Foreign Minster Sergey Lavrov extended Putin’s invitation to Kim. The North Korean leader accepted the invitation but did not act on it for months as Pyongyang haggled with the United States over its denuclearization drive.

Those talks are dead in the water after the collapse of the second U.S.-North Korea summit in Hanoi, Vietnam, in February. Pyongyang may renew its saber-rattling by launching a new missile and appears now to be hedging its bets by cozying up to Moscow. It may be seeing whether the Kremlin can lend its influence to talks with the United States.

One South Korean official told the JoongAng Ilbo that the announcement of the Russian interior minister’s visit to Pyongyang by state media could be a pressure tactic aimed at Washington.

“In usual circumstances where there are exchanges over issues like security, it is customary to proceed off the record,” the official said. “But the fact that North Korea revealed this through their state media can be seen as a form of protest toward the United States.”

With Seoul and Washington preparing to hold their own summit on April 11 to discuss the North’s denuclearization, Kim Jong-un’s meeting with Putin may come as early as this week, since the rest of April is filled with key events in North Korea that require his presence.

“North Korea is scheduled to hold a plenary session for its Supreme People’s Assembly [the country’s rubber-stamp legislature] on April 11, while April 15 is the birthday of [the country’s founder] Kim Il Sung, one of the country’s most important holidays,” the official said. “This suggests Kim Jong-un’s visit to Russia is imminent, lest it be delayed to late April.”

Whether Russia’s entrance into the complex denuclearization calculus between the North, the United States and South Korea will affect it is uncertain, but both Seoul and Washington have expressed interest in keeping dialogue with the North alive.

In a cabinet meeting on Monday, South Korean President Moon Jae-in said he would devote his efforts at the upcoming summit with U.S. President Donald Trump toward restarting negotiations with Pyongyang.

“Neither the two Koreas nor the United States wants to go back to the past,” Moon said.

U.S. Secretary of State Mike Pompeo even brought up the possibility of a third Trump-Kim summit in an interview on Tuesday, saying that he hoped “in the coming months our two leaders will be back together” to make a “substantive first step or a substantive big step along the path to denuclearization.”

Pompeo said it was hard to know when that would be, but added that it was “in America’s best interest to resolve this as quickly as we can.”