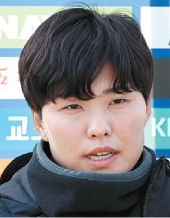 Ji faced her national teammate Cho So-hyun in the Football Association Women’s Super League (WSL) match between Chelsea Women and West Ham United Women in London on Sunday, which ended in a 1-1 draw.

It was the first time that the two Koreans women went head-to-head in Britain. Ji has been playing for Chelsea Ladies since 2014, while Cho joined West Ham United Women this January.

“It felt really good to play together [with Cho] in a foreign country,” Ji said ahead of the national team training at the National Football Center (NFC) in Paju, north of Seoul. “I hope many players can play in leagues overseas.”

Ji and Cho are two of the 26 players called up to the women’s national football team for Korea’s upcoming friendly matches with Iceland at home. The Taeguk Ladies are scheduled to meet Iceland in Yongin, south of Seoul, on Saturday and host them again three days later in Chuncheon, Gangwon.

The two matches are tune-ups for the 2019 FIFA Women’s World Cup in June. Korea is with Norway, Nigeria and hosts France in Group A.
“They are important friendly matches ahead of the World Cup, and it’s important for us since we get to meet local football fans after a long time,” she said. “Since we don’t have many opportunities to play against European teams, we need to play well.”

Ji, Korea’s all-time leading scorer with 53 goals in 113 caps, said she is ready to pass on lessons she learned from her European experience to young teammates.

“We need to make quick decisions in the game since we’re behind in power and speed against European players,” she said. “We also need to get rid of small mistakes in order to get a good result.”

Korea is looking to reach the round of 16 at the Women’s World Cup in France, as they did in Canada four years ago.
“Compared to 2015, we now have more young players on the team, so I want to tell them about my experiences,” she said. “I hope we can overcome the pressure together and collect better results than we had four years ago.”