Changes made to feasibility study process

Changes made to feasibility study process 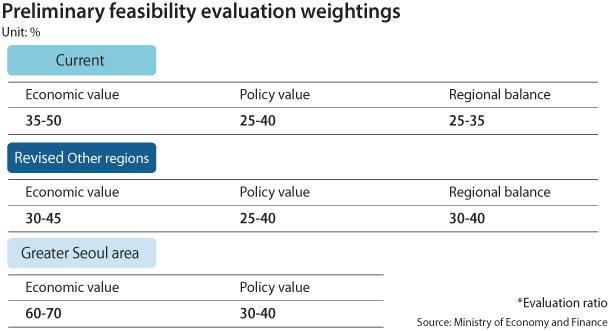 The government, for the first time in 20 years, is making major changes to the way preliminary feasibility studies are conducted in hopes of boosting regional economies to better balance national growth.

According to the Ministry of Economy and Finance on Wednesday, the new feasibility evaluation process is being adjusted to promote investment and spending outside of Seoul.

The major exception will be Seoul, where there will be no weighting for regional development. Economic value will be weighted up to 70 percent.

Reforms will also be made in how the economic subcategory is evaluated. Currently, the greatest concerns center around whether the project in question aligns with government policy and the level and quality of preparations.

The revised guidelines call for a focus on jobs, the impact on living conditions, safety and the environment. Consensus with residents will be a priority.

In the past, the Korea Development Institute was responsible for the evaluations. Under the new guidelines, the Korea Institute of Public Finance will share the burden. The government hopes that these changes will reduce the time it takes to review the projects to under a year, down from the current average of 19 months.

“Since the preliminary feasibility evaluation was adopted in 1999, it has contributed significantly to fiscal efficiency, verifying and filtering out unnecessary projects,” Hong Nam-ki, the finance minister, said Wednesday.

A ministry official said major cities like Daejeon, Daegu, Busan and Gwangju will be the biggest beneficiaries of the changes.

The changes came after the government at the beginning of the year fast tracked 23 infrastructure projects with estimated cost of 24.1 trillion won ($21.2 billion) by bypassing the preliminary feasibility studies as the economy has started to weaken.

The government had been reluctant to “artificially” prime the economy through major infrastructure projects, as had been done by previous conservative administrations.

The government said it has decided to reduce the period of the feasibility evaluation, which has become longer over the years. In 2009, the preliminary studies had taken an average of 7.8 months. As of 2017, that period has tripled to 21.3 months.

The ministry said, as 20 years have passed and the economic and social environment and conditions have changed, it was time to reflect those changes.

The preliminary feasibility study was first adopted in 1999 to prevent the wasting of taxpayer money in pursuing projects while enhancing the management of public investment projects.

Projects covered are those estimated to cost more than 50 billion won and requiring more than 30 billion won of government expenditure, including not only major infrastructure projects but also research and development, information digitalization projects and welfare programs.

According to the government, over the past 20 years, 849 projects worth 386.3 trillion won have undergone preliminary feasibility evaluations. Of those, a total of 300 projects, 35.3 percent, were rejected, saving 154.1 trillion won.

The government said it was able to reduce the infrastructure budget from 24.7 trillion won in 2009 to 19.8 trillion won this year by improving financial efficiencies through feasibility evaluations.