Revenue up for listed companies, but profit declines

Revenue up for listed companies, but profit declines 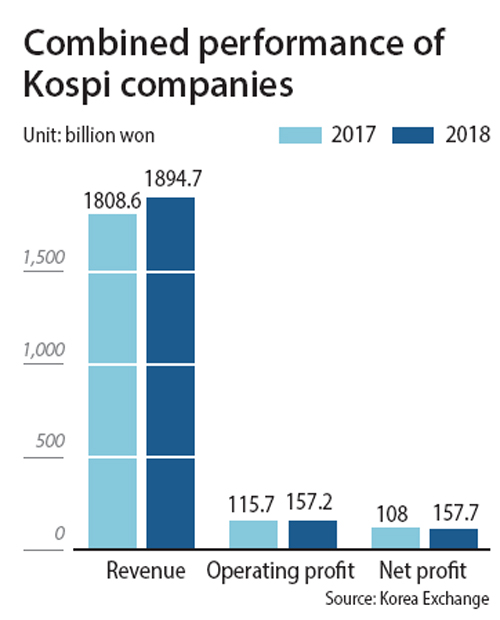 Revenue for companies trading on Korea’s largest markets - the Kospi and the Kosdaq - increased in 2018, but profit dropped, with more than one-third of Kosdaq companies reporting losses.

According to the Korea Exchange Wednesday, revenue for 540 companies traded on the Kospi and with fiscal years ending December totaled 1,894 trillion won ($1.67 trillion), a 4.76-percent increase year on year.

When the performance of Samsung Electronics is excluded, overall performance is worse. Without the electronics company, which has the largest market cap, operating profit fell 4.57 percent to 98.9 trillion won while net profit dropped 13.51 percent to 63.6 trillion won.

The situation could get worse as Korea’s semiconductor industry struggles with low global demand.

“This year, we expect semiconductor-related companies - including Samsung Electronics and SK Hynix - to see their performances weaken,” said Oh Hyun-seok, head of research at Samsung Securities.

Last week, Samsung Electronics in a regulatory filing said it expects to underperform in the first quarter on struggles in its display and memory businesses. The announcement was considered unusual.

The company is threatened by the rising competition. IC Insights, a Scottsdale, Arizona, based market research company, last month said that Samsung this year could move to second place in terms of chip revenue behind Intel. It projects that Intel, which is heavily focused on non-memory chips, will see its revenue this year increase 1 percent from $69.9 billion to $70.6 billion.

Semiconductor revenue for Samsung Electronics is expected to fall 19.7 percent from $78.5 billion to $63.1 billion.

Considering that the revenue of Samsung Electronics is about 12 percent of the total for all 540 companies, the shrinking revenue and profit of the IT company will likely have an outsized impact.

“This year, the operating profit of companies listed on the Kospi will likely shrink 19 percent, while net profit will fall 16.5 percent,” said Seo Young-ho, head of KB Securities’ research center.

The combined revenue of the 911 companies traded on the Kosdaq whose fiscal year ended in December increased 4.69 percent to 169 trillion won. Yet operating profit fell 11.58 percent to 8.4 trillion won, while net profit was down 8.66 percent to 4.3 trillion won.

Oh of Samsung Securities said the increase in the number of Kosdaq companies with losses was largely due to the government policy change that has allowed SMEs with competitive technologies to be listed on the junior market despite reporting losses.

The government in recent years has lowered the bar for listing for SMEs considered to have leading technologies. Last year, roughly 20 such companies succeeded in getting to market, which is nearly triple the number in 2017.

The Samsung Securities research head said it is also the result of the stricter auditing of company accounts.