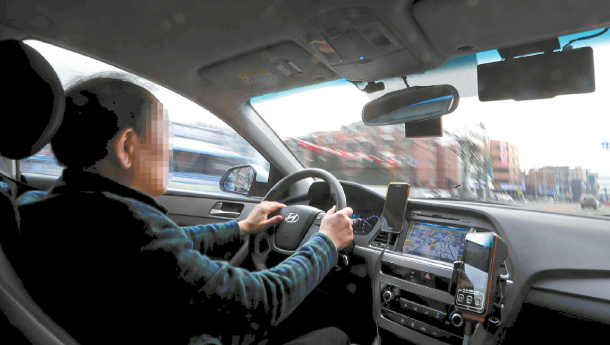 A cab driver driving in Dobong District, northern Seoul, on March 15. Much of his meager income goes toward money given at funerals and weddings. [KIM SANG-SEON]

Wedding ceremonies and funerals of friends and relatives are burdensome for a 63-year-old taxi driver surnamed Hong. He not only can’t work during the day to attend the events, but he also has to pay at least 200,000 won ($176) for events hosted by his close friends.

“After quitting my original job, my income was reduced to one-third of its previous level, but I am forced to spend between 300,000 won to 700,000 won for weddings and funerals,” Hong said while waiting to fill up his tank last month at a gas station in Dobong District, northern Seoul.

“It’s just too much pressure. In Korean society, I would be pushed out of my group of friends if I skip those kinds of events.”

“I still send the money even if I can’t attend,” Hong added. “When word goes around that someone is avoiding attending weddings and funerals, he or she is often ostracized. But some people can’t bear it for long and quietly leave group chat rooms.”

Congratulatory and condolence money often take up a huge portion of Hong’s monthly budget. He attends around five or six weddings and funerals and spends 300,000 won on gifts each month on average.

“Five to six years after I quit my original job, I became a lower-class citizen,” Hong said. “I’m at the bottom of society now, so it’s burdensome to pay for weddings and funerals.”

Hong quit his job at an insurance company in 2012 after working there for 33 years. While working at the company, he earned nearly 100 million won a year and spent around 500,000 won a month attending weddings and funerals.

He is still bleeding on average about 300,000 won a month even though he has decided to attend fewer such events.

Hong received six months of education to land employment related to gardening and forestry after quitting his insurance job, but he was not successful in gaining employment in that field.

That’s when Hong bought a taxi with his retirement pay and became a driver for a living, making only about 900,000 won a month. He and his wife now earn a total of around 2 to 3 million won a month, which includes pension payments from the National Pension Service.

Hong and his wife’s financial burden increases during months with more weddings and funerals, and he tries to adjust the level payment to match the relationship. For events involving relatives, Hong pays between 500,000 won and 1 million won. If an event involves school friends, he pays between 200,000 won and 500,000 won.

Hong is not alone in dealing with such burdens. According to 24 people in their 50s and 60s interviewed by the JoongAng Ilbo last month, 11 said they were financially challenged by the costs of attending weddings and funerals.

In Korea, the problem is not so much the middle class shrinking but the expansion of the ranks of those considered lower income.

The National Health Insurance Service data, based on monthly payments linked to income levels, indicates that 18.3 percent Koreans in 2001 were of lower income. That number is now 23.5 percent. Those categorized as middle class has risen from 36.7 percent to 41.6 percent.

Hong further explained his living conditions to the JoongAng Ilbo during an hour-long drive from Jongno District, central Seoul, to Ilsan, Gyeonggi.

“As I entered my 60s and started losing income, I no longer was able to maintain my middle-class status,” Hong said. “I made so many congratulatory gifts and sent condolence money to people around me before quitting my job, but fewer than 10 percent of those I invited showed up at my kid’s wedding a few years ago.”

Many feel the same way as Hong does. Congratulatory and condolence money are not easily cut from monthly budgets.

According to a 2017 report from Statistics Korea, households surveyed ranked congratulatory and condolence payments as the No. 7 spending they aim to reduce.

Seo found a new job as an apartment supervisor after quitting his job at the bank, but was fired later as his company had a hard time finding properties for him to manage.

Many Koreans in their 50s and 60s are now receiving more wedding invitations as people have started to marry later than before.

“Most of my friends’ children would have already gotten married by now, but we are just recently being inundated with wedding invitations,” said a 62-year-old man surnamed Chung. “We once had to spend 400,000 won when we attended four wedding ceremonies in a day.”

Chung got married at age of 26 and had two children three years into the marriage. His children are now in their early 30s, but both of them are still single.

Increased life expectancy is also delaying funerals for parents of people in their 50s and 60s. According to the World Bank, the average life expectancy for Koreans reached 82.02 in 2016.

Koreans in their 50s and 60s are now faced with an increasing number of funeral notices, but unlike in the past when they had stable incomes from their long-held jobs, paying condolence money is now more burdensome to them as their income levels are reduced.

“Attending weddings and funerals has deep roots and is an important social communication method for Koreans,” said Kim Keun-hong, former president of the Korea Gerontological Society and a social welfare professor at Kangnam University.

“We need a social movement for people to spend less on congratulatory and condolence money while attending weddings and funerals of only those truly close to them.”