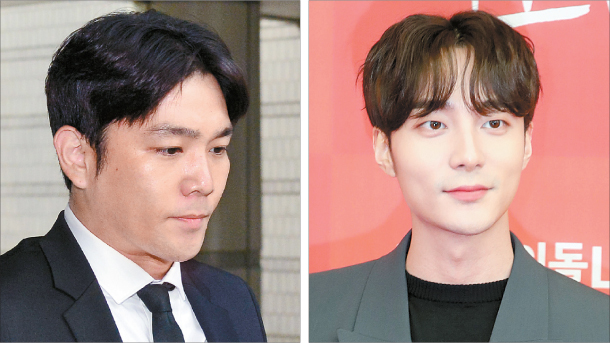 Singers Kangin of Super Junior, left, and Roy Kim, right, were revealed to have been a part of the controversial KakaoTalk chat room with singer Jung Joon-young. [NEWS1]

Singer Roy Kim will promptly fly back to Korea to attend police questioning, his agency Stone Music Entertainment announced on Wednesday following reports on Tuesday that revealed Kim was in the controversial KakaoTalk group chat where the disgraced singer Jung Joon-young shared his illegal videos.

On Tuesday, the Kyunghyang newspaper reported that the police were scheduling to call in a 26-year-old surnamed Kim for questioning regarding the chat room in which Jung shared illicit videos. The report was followed by a revelation by Sports Kyunghyang that Kim was Roy Kim.

According to the report, there were seven people in the group chat, including Jung, Kim and Choi Jong-hoon, a former member of FT Island who has been charged with attempting to bribe a police officer.

“While Roy Kim is currently studying in the United States, we are arranging his schedule so that he can come [to Korea] and be investigated as soon as possible,” the agency said. “He will be sincerely cooperating with the investigation.”

Kim befriended Jung in 2012 while they were both contestants on the Mnet audition program “Superstar K,” and the two have since openly flaunted their friendship on TV. Kim is known for once saying that “Jung ruined me” during a TV appearance without citing reasons why.

Their friendship has led many people to suspect that Kim may also be a member of the group chat with Jung, but no official claims were made until Tuesday.

According to the police, there were a total of 23 text conversations in which Jung had shared his videos, to a total of 16 people. Seven of them have been booked by the police so far, including Jung, Seungri of Big Bang and Choi.

Further revelations were made on Tuesday evening when SBS reported the names of two other celebrities along with Kim: Kangin of Super Junior and model Lee Cheol-woo, who appeared on a TV show with Jung in 2016.

While Lee’s agency explained to SBS that they “had not been aware of the matter,” Kangin’s agency Label SJ released an official statement on Wednesday that even though he had been in the chat room with Jung, he had never shot or distributed any of the illegal content that were shared through the conversations.

“It’s true that there was a group text made when they were in the same variety show, but the chat room has been deleted since it’s from three years ago. Kangin also stated that he has not shot or distributed any illegal videos, even though he can’t remember what the other members [of the conversation] uploaded or said,” the agency explained.

“Although he has not been contacted by the [police], he will cooperate with them if he gets the call,” Label SJ said.