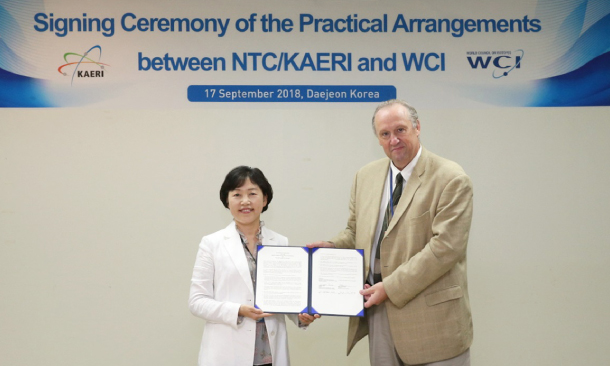 An official of the Korea Atomic Energy Research Institute signs a contract with Dr. Nigel Stevenson, president of the World Council on Isotopes, to enhance a joint study on radioactive materials for medical diagnosis and treatment in Daejeon last September. [KAERI]

South Korea’s first President Syngman Rhee called Seoul National University’s physics Prof. Yoon Se-won in 1957. Yoon was among the first class of the state-funded scholarship program on nuclear energy. He had just returned from the International School of Nuclear Science and Engineering at the Argonne National Laboratory in the United States. President Rhee said, “You studied nuclear science? The government will support you, so find a place to set up a lab.”

Two years later, the Korea Atomic Energy Research Institute (Kaeri) was established. Researchers got special treatment. The head of the Central Engineering Institute — the predecessor of the Korean Agency for Technology and Standards — was a grade two civil servant. Kaeri had three grade one members, the highest rank, and five grade two members. Sixty years have passed since then. The Kaeri will hold its 60th anniversary ceremony at the National Science Museum. Yet it doesn’t feel like a special birthday celebration. Compared to the 50th anniversary 10 years ago, the event has scaled down. Prime Minister Han Seung-soo attended the 50th anniversary, but this year the science minister’s attendance is yet unconfirmed.

At the same time, the number of award recipients decreased from 40 to 10. Decorations and awards, and both presidential and prime minister’s commendations will not be given. Instead, just 10 ministerial commendations will be awarded. Despite exporting a nuclear power plant to the United Arab Emirates (UAE), winning a bid for a research reactor in Jordan and winning a successful bid for a research reactor improvement project in the Netherlands, the number of prizes shrank sharply. The institute considered holding an international seminar, but decided to make it a domestic one for “various reasons.”

The nuclear science community tried to comfort itself that the 50th anniversary ceremony was grand. But self-consolation feels more lonely to me. It is a pity that young researchers who should continue their jobs in the future are leaving the field one after another. At Seoul National University last year, 20 percent of the freshmen in the nuclear engineering department dropped out. Once a major contributor to our energy independence and exports, the Kaeri is awaiting a humble birthday.