SKT offers unlimited 5G, but not for long

SKT offers unlimited 5G, but not for long 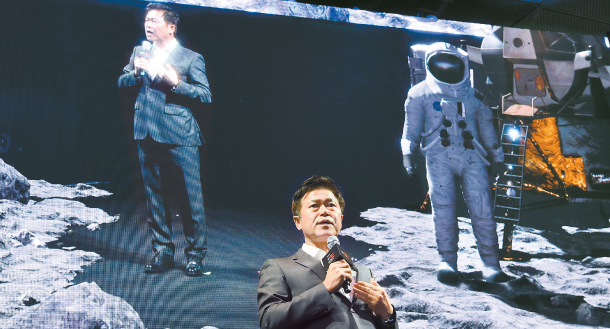 SK Telecom CEO Park Jung-ho announces the company’s 5G phone plans in front of a screen that shows him in augmented reality on the moon. Park said 5G will usher in significant changes to humanity, just as the moon landing did five decades ago, during the ceremony at SK Telecom’s headquarters in Euljiro, central Seoul, Wednesday. [YONHAP]

SK Telecom boasted it offers the most comprehensive 5G coverage in the country during a press briefing held Wednesday in Seoul, introducing phone plans that will offer unlimited 5G data - but only until the end of this year.

“As of today, we have established 35,000 5G base stations, even in monumental venues like Mount Halla and the country’s easternmost islets of Dokdo,” said SK Telecom CEO Park Jung-ho at the event. “By the end of this year, we will have 70,000 base stations ready for 5G.”

Korea’s largest mobile carrier added in a statement that its coverage includes KTX and subway stations in greater Seoul as well as 120 department stores and hypermarkets.

KT, the second-largest mobile carrier in the country, said Tuesday it will start with 30,000 5G base stations when the network is commercialized tomorrow in time with the launch of Samsung Electronics’ Galaxy S10 5G.

A spokesperson from the country’s smallest carrier LG U+ said Wednesday it plans to build up 50,000 base stations by the first half of this year. It didn’t say how many base stations it will have live tomorrow.

“We are not willing to lose to our competitors,” said Kang Jong-ryeol, head of ICT infra center at SK Telecom, at the briefing.

Despite the large coverage, SK Telecom did not introduce a completely unlimited 5G data plan like KT did the previous day, instead releasing promotions that make some of its plans look like unlimited data plans.

Among the four plans introduced by the SK affiliate, the two most expensive plans - at 95,000 won ($84) and 125,000 won - offer unlimited data without any compromise in speed until the end of this year if customers subscribe to the two plans before the end of June. Without the promotion, the 95,000 won 5GX Prime plan will offer 200 gigabytes of data and the costlier 5GX Platinum plan will offer 300 gigabytes of data.

SK Telecom is also giving a 6,000 won discount per month for 24 months on the 95,000 won plan, so the monthly fee would essentially come down to 89,000 won. This also only applies to those who subscribe before the end of June.

“Well, it doesn’t actually mean SK Telecom will ultimately cut off unlimited data plans by the end of this year,” said Ryu Young-sang, head of the carrier’s mobile network operator business. “We chose to go with a three-month promotion for now considering the market uncertainties we are facing, but we plan to make amends or release new plans later in the year which reflect market responses.”

Apart from the two plans, SK Telecom also released a 75,000 won plan and a budget 55,000 won plan. The former offers 150 gigabytes of data at 5G speeds, then slows down to 5 megabits per second. The company said 150 gigabytes is enough data to watch 60 high-definition movies.

LG U+ also announced Wednesday that it plans to release an unlimited plan, although no details have yet been revealed.

As all three carriers have now revealed their prices, it is down to the customers to decide which carrier will ultimately win the war.

While phone plan prices could be a big factor for early 5G adopters in choosing their carriers, another key-point is what kind of differentiated services the carriers can offer.

SK Telecom said it has secured a partnership with Riot Games to create virtual reality (VR) and augmented reality (AR) versions of League of Legends Champions Korea, one of the most watched Esports games in Korea, and broadcast games exclusively from the first half of this year.

As for AR-based games, it inked an exclusive deal with Niantic, the developer of Pokemon Go, to launch Harry Potter AR by the first half of this year. Details regarding the game were not revealed, but the game looked somewhat similar to Pokemon Go, but with magical creatures, not Pokemon, to catch.

Ryu from SK Telecom said he expects to attract at least a million 5G subscribers by the end of this year. Currently, the carrier has over 27 million subscribers to its wireless mobile service.