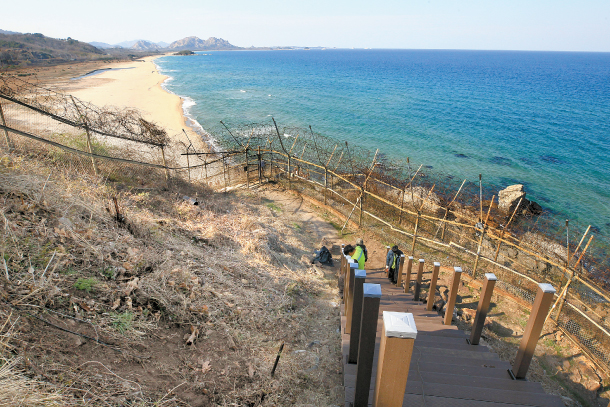 Workers build a hiking trail on the eastern coast of the demilitarized zone (DMZ) on the border with North Korea on Wednesday. The South Korean government announced Wednesday a plan to make three hiking trails inside the DMZ. [YONHAP]

The South Korean government on Wednesday announced a plan to build hiking trails in the demilitarized zone (DMZ) on its border with North Korea, part of a larger blueprint to transform the area into a so-called peace park.

The plan to pave three trails totaling a length of 42 kilometers (26 miles) inside the DMZ was announced at an inter-ministerial briefing at the central government complex in central Seoul involving officials from the Ministries of Unification, Defense, Interior, Culture and Environment.

The Inter-Korean Exchange and Cooperation Council, an inter-ministerial body of government and civilian officials tasked with reviewing joint projects with the North, earmarked a maximum of 4.38 billion won ($3.9 million) for the trails, to be paid through an inter-Korean cooperation fund.

The trails will be located in parts of the approximately 250 kilometer-long DMZ where the two Koreas dismantled 10 guard posts each last year as part of a military agreement signed in September.

In the first phase of the initiative, western, central and eastern trails will be laid on the basis of existing military and forested paths with minimum construction to preserve the natural landscape of the area, according to a Unification Ministry brief. Over the long run, the government plans to connect the peninsula’s western and eastern coasts through such trails.

A 20-kilometer western trail in Paju, Gyeonggi, will begin on the banks of the Imjin River that separates the two Koreas near their western coast and will pass through the Dora observatory, a civilian-access point in South Korea close to the border.

A 14-kilometer central trail in Cheorwon County, Gangwon, will begin at the Baekma (White Horse) Ridge Battle Monument, which commemorates the site of a fierce battle during the 1950-53 Korean War, and will link up to Arrowhead Ridge, the site of another bloody battle where an excavation of remains by South Korean troops took place in October. 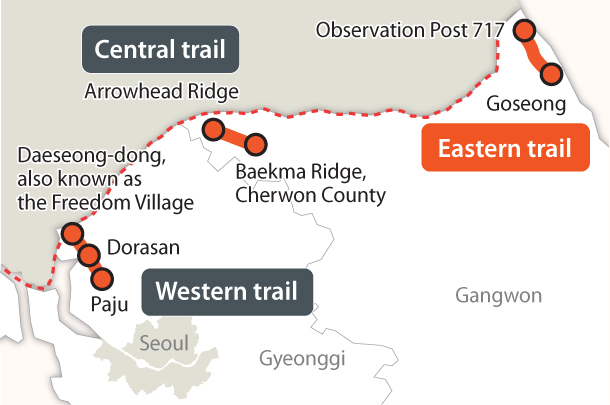 An eastern trail in Goseong County, Gangwon, will follow a military fence on the coast that leads to the South’s northernmost military observatory overlooking the North’s famed Mount Kumgang. This trail in Goseong, which will have two courses measuring 2.7 kilometers and 4.5 kilometers each, will be the first to open to the public by late April, followed by the trails in Paju and Cheorwon. The formal names for all three trails will also be determined through a public survey within the month.

While technically not an inter-Korean project since it involves no input from the North, the project will be financed through the cooperation fund since it serves as “an elementary step towards transforming the DMZ into a peace zone,” said a Unification Ministry official.

Turning the heavily fortified DMZ, one of the last frontiers of the Cold War, into a zone of peace was a key tenet in the Panmunjom Declaration signed by South Korean President Moon Jae-in and North Korean leader Kim Jong-un at their first summit last April.

A military agreement was signed during their second summit in Pyongyang last September that vowed no hostile activities were to take place on the border, and called for the dismantling of guard posts inside the DMZ.

Though Seoul hails the trail initiative as an important step, concerns over safety may arise. The trails could be within range of fire from North Korean guards with the northernmost point of the Paju trail only 1.5 kilometers from a North Korean guard post and the South has yet to inform Pyongyang of its intention to devote these parts of the DMZ for tourism.

The initial plan to open all three paths to the public had to be restricted to the eastern trail on Wednesday due to safety concerns.

Most of the funds set aside for the project will be allocated to safety measures, like surveillance cameras and fences, and facilities like bathrooms along the paths. Tourists wanting to hike the trails, who will be limited to 200 a day, will also be supplied with bulletproof vests and helmets, and will have guides under the protection of soldiers, the government said. Starting from next Thursday, April 11, any person can apply online to take part in scheduled tours through the Interior Ministry’s website.

The Ministry of Defense has yet to gain the approval for the trails from the United Nations Command, which holds jurisdiction over the South’s portion of the DMZ as per the armistice agreement that ended the Korean War. An official said all that was needed was a final go-ahead from the body that a military official said was likely to come later this month.

“We will designate areas where mobile phone photography is permitted and add further surveillance equipment to minimize the effect [of the tours] on military operations, training or secrecy in the area,” the official said.