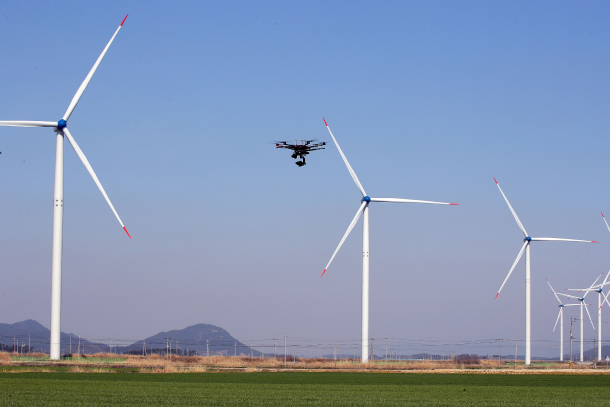 A maintenance drone flies alongside wind turbines at the Yeonggwang wind farm in South Jeolla on Thursday. Korea East-West Power held an opening ceremony for Korea’s largest wind farm that is able to power around 73,000 households. [YONHAP]

The new wind turbines - three rated at 2 megawatts and 32 at 2.3 megawatts - are an addition to existing turbines in the area that have a combined capacity of 63 megawatts. The entire complex is now rated at 142.6 megawatts. It generates power both offshore and onshore.

The wind farm complex, including the existing and new assets, is expected to power nearly 73,000 households and reduce carbon dioxide emissions by 111,000 tons a year. 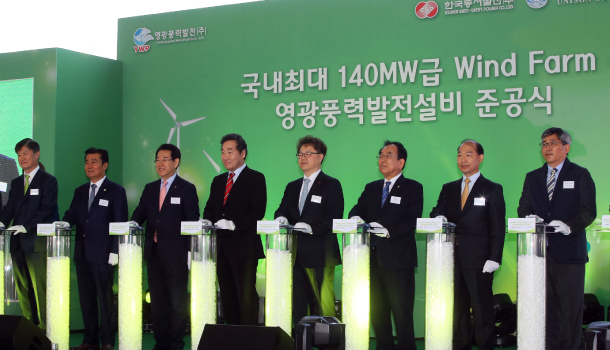 Yeonggwang is in the southwestern part of the country about 250 kilometers (155 miles) from Seoul.

“Fossil fuel may create energy, but it also has a negative influence on public health,” said Prime Minister Lee Nak-yon at the ceremony. “The renewable energy industry can protect the public from climate change and air pollution.”

“The completion of the Yeonggwang wind farm is a new beginning toward that goal,” added Lee.

EWP, which was spun off from Korea Electric Power (Kepco) in 2001, emphasized its cooperation with local residents, saying that it will set aside 1 won per kilowatt-hour of energy produced by the turbines and use the funds for regional development.

The turbines at the Yeonggwang wind farm are situated on rented farm land. The complex is also expected to create around 4,200 new jobs in the area. The power company also vowed to beat government targets in its renewable push.

“With a 140-megawatt wind farm on the west coast and a 750-megawatt wind belt on the east coast, and with a 15 trillion won investment through 2030, we are planning to reach a renewable target of 25 percent,” said EWP CEO Park Il-jun. “We are also planning to contribute to the local renewable energy industry by installing 200 wind turbines built in Korea.”

The Ministry of Trade, Industry and Energy also outlined its push to move away from fossil fuels in a separate statement Thursday.

“Considering the public concern surrounding the recent worsening levels of fine dust, we are aggressively pursuing plans to make additional reductions in the use of coal for power.”