The current account surplus remained in the black for an 82nd consecutive month, though the goods surplus dropped to a five-year low. 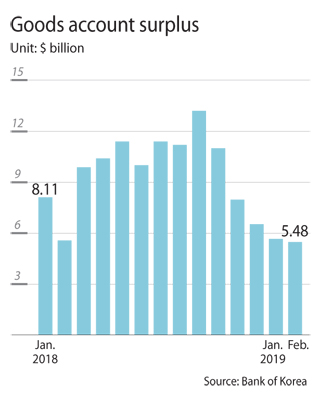 The overall current account surplus, which includes the balance of trade in goods and services as well as financial and cash transfers, was $3.6 billion in February, down 7.7 percent from the $3.9 billion a year earlier.

Korea has reported a current account surplus since May 2012.

The goods account, which measures the balance of exports versus imports, shrank to $5.48 billion, down 3.2 percent from the previous month and at the lowest level since July 2014.

Samsung Electronics and SK Hynix have reported or anticipated worse-than-expected earnings since the end of last year in the face of slowing orders from data server companies and declining memory chip prices.

The Bank of Korea also cited a global slowdown in trade and tepid growth in China’s manufacturing sector, a key market for many export-oriented companies.

The deficit in the services account, which includes travel, transport and construction, has continued to fall, coming in at $1.72 billion, as the number of visitors from China and Japan to Korea has been steadily increasing.

Arrivals from China jumped 15.4 percent to 453,000, while those from Japan increased 3.2 percent to 213,000. A drop in spending by Korean travelers overseas also contributed to the improvement.

“Despite a steady rise in the number of people going abroad, a deficit in the travel account has narrowed for months,” the central bank said. “It is because Korean people go abroad more often but spend less.”

Departures from Korea were up 13.3 percent year on year.

In February, primary income fell to $360 million from $1.44 billion a year earlier due to an increase in dividend payouts to non-residents.

According to the Ministry of Trade, Industry and Energy on Monday, Korea’s exports fell 8.2 percent to $47.1 billion in March.