JEON YOUNG-SEON
The author is an industrial news reporter of the JoongAng Ilbo. 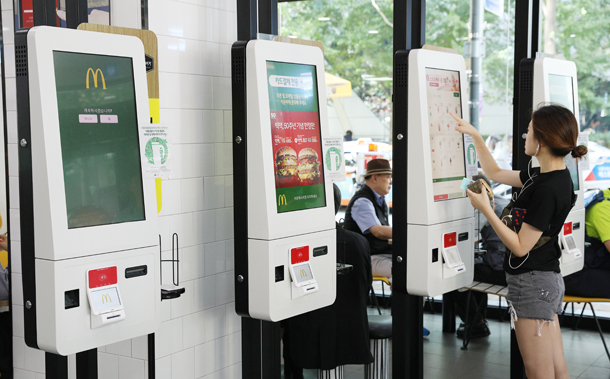 A customer orders a burger at a fast food restaurant in Seoul through a kiosk. Franchise restaurants and mom-and-pop stores are increasingly using kiosks after the enforcement of the 52-hour workweek. [NEWS1]

When you go to the airport, one thing you notice is that regular people are no longer worthy of human service.

When you fly economy, you hardly interact with another human being between the time when you arrive at the airport and when you board the plane. Most passengers are directed to handle most procedures by themselves. You check-in online and receive your boarding pass from a kiosk. You send your luggage along and go through automated immigration screening. You don’t need to talk to anyone.

Airlines and airport corporations can drastically cut costs by using various unmanned systems. There are initial costs of setting up machines, but in the long term, it’s quite lucrative. Of course, airlines claim that smart IT services enhance passenger convenience by reducing wait times. Yet notably, business and first-class passengers get to use staffed check-in counters and receive services from employees. This is proof that the class that you can afford determines whether you meet a person.

It is not just at airports where human services are diminishing. Kiosks are rapidly spreading in the fast food industry. As of January, Lotteria had installed kiosks at 61 percent of its stores nationwide. A kiosk can handle 1.5 times the workload of a human. It is also free from the 52-hour workweek. GS25’s smart convenient store allows entry by looking at a camera when a customer registers their name and face. Emart and Lotte Mart also introduced self-checkout systems. In finance, medicine and education, artificial intelligence (AI) will replace humans.

It’s noteworthy that automation has been mostly introduced in fields used by working-class people. Even though it’s described as “smart,” the biggest reason is to keep prices down: Korean society worried about the digital divide when the internet was growing, and it turned out to be a groundless worry; what we need to worry about now may be a human divide. If you don’t have money, you have to choose cheap technology over human interaction. Lately, The New York Times ran an article titled “Human Contact Is Now a Luxury Good.” Those earning an average income have to buy products from unmanned stores, talk to AI systems and learn about the world on YouTube.