5G has arrived, but what can it actually do?

5G has arrived, but what can it actually do? 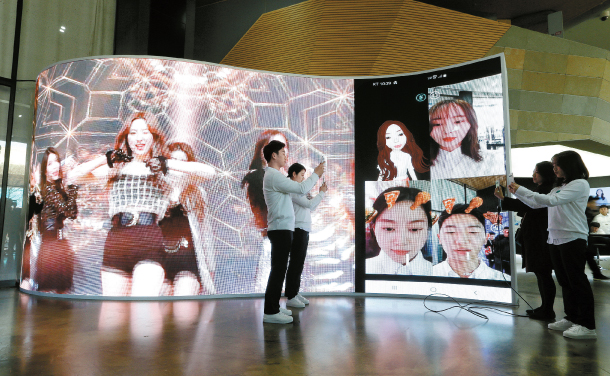 KT employees demonstrate the 5G services available on smartphones during a press conference at the KT headquarters in central Seoul on April 2. All three mobile carriers launched their 5G networks on Wednesday, but practical uses for the high-speed network are still limited. [AP/YONHAP]

Korea’s three mobile carriers - SK Telecom, KT and LG U+ - launched their high-speed 5G networks on Wednesday night ahead of the public release of the Samsung Galaxy S10 5G today.

After months of media hype, 5G finally became available at 11 p.m. on Wednesday night, two days ahead of the scheduled date.

Before the network was unveiled, telecommunications companies fought a pitched battle over payment plans and promotions as they desperately tried to attract as many early 5G adopters as possible.

Despite all the fuss, it’s still not entirely clear exactly who needs 5G at the moment, what they can do with it and whether it’s really worth the price.

According to mobile carriers and electronics companies, 5G has the power to transform all aspects of our lives, from public safety to education and transportation. But for most of us, the noticeable change is going to be in entertainment.

The mobile operators each boast of unique content services - but in nearly all cases it’s what they plan to provide, not what they’re already offering.

SK Telecom established an exclusive partnership with Riot Games to broadcast League of Legends Champion Korea in virtual reality (VR) and augmented reality (AR) in the first half of this year and also plans to launch a Harry Potter AR game through an alliance with Niantic, the company behind Pokemon Go.

Its other planned features include virtual language coaching and virtual overseas art trips.

But as of now, all 5G users can actually enjoy are baseball games and content from video streaming service Oksusu at super-high quality - both of which are also available on LTE at fairly high quality.

The company says it is working on 8,000 pieces of content, but when they’ll actually be available isn’t clear yet.

LG is especially proud of its star date function, which allows users to jump into a virtual date with celebrities by simply putting on a VR headset. In a separate AR service, users can be seen dancing next to pop star on the phone’s screen. A famous singer will even dance for the user to keep them company. That service is already live.

KT has introduced an AR-based video calling app called Narle. Its users can use 3-D avatars and AR emojis. Another communications app, Real 360, allows up to four people to hold a simultaneous video call. Each user can be streamed in 360 degrees.

“VR and AR are commonly discussed as prime 5G content, but there isn’t any killer content yet,” said Kim Yeon-hak, a professor from Sogang University’s Graduate School of Management of Technology. He added that such content is needed in order to attract users to 5G.

Insufficient content is one thing, but its appropriateness is another issue that seems inevitable in the 5G era.

Mobile operators are ambitiously working on 5G content based on VR, AR and artificial intelligence (AI), but a major area that can be enjoyed fairly immediately is K-pop.

With 5G, consumers can enjoy more interactive experiences with K-pop stars like dancing alongside them and zooming in to enjoy the finer details of performances in 360 degrees.

But whether people should actually be able to watch K-pop stars from any angle and zoom in on their performances - especially teenagers, the prime target for this content - is a very different question.

Some videos are also intentionally sexualized. In one VR video from LG, YouTuber Seo Yoon invites a viewer to join her in a bubble bath, saying, “Oppa, come inside [the bath]. I might disappear.” Oppa is an endearing term for an older male.

“K-pop is a good resource to create AR and VR-based content,” said K-pop critic Mimyo. “Such content is in line with the public’s demand to enjoy more interactive and personalized experiences with celebrities, but they could also foster the commercialization of sex.”

Mimyo explains that allowing people to join celebrities at any time and giving them control over which angles to view them from could end up reinforcing the idea that the public has ownership over celebrities. This could hurt the industry, which is already criticized for the commercialization of sex.

Such content could be especially harmful to teenagers, whose values have not yet been formed properly.

Currently, there isn’t an age limit on this content.

“Adults are able to separate themselves from celebrities, but teenagers could become too involved to the extent of creating unhealthy fantasies,” said Kwak Geum-ju, a professor of psychology at Seoul National University.

“Developing sexuality in teens is natural. But if celebrities are excessively involved in that phase of development, teenagers could build wrong idea on how one should look. It could foster lookism and result in depression derived from the gap people feel between reality and the virtual world. Once thoughts of values are formed in one’s teens, they’re likely to last for life.”

But these concerns should not prevent the development of 5G-based technology, according to Park Gi-su, a professor who teaches cultural content at Hanyang University.

“At this stage, opening up the possibility of various content is necessary for expanding the 5G business. The industry could be discouraged if it’s only approached from an ethical point of view,” said Park. “Entertainment content involving K-pop stars could play a major role in promoting exports in the future when the infrastructure for 5G becomes stabilized.”

But the other cost is the monthly payments users need to make for the network service.

Although telecoms operators are trying to come up with affordable promotions, they are temporary and plans are generally more expensive than what most people are paying for with the current LTE service.

The cheapest payment plan introduced by the three carriers costs 55,000 won for less than 10 gigabytes of 5G data. With that, a user can’t even enjoy an hour of streamed VR content. VR eats up about 25 to 30 gigabytes of data per hour.

Due to the data-heavy content, it’s natural that 5G users will spend more on data than LTE users.

Although the carriers have been locked in fierce competition to offer the best deals and climb the ranks in the telecommunications market - or maintain the top spot - many people don’t seem happy with the prices offered.

According to a poll from Realmeter Research Center conducted late last month, 76 percent of survey participants believed the appropriate price for 5G is below 50,000 won. Five hundred people aged 19 and above took part in the survey.

“It’d be better to generalize the use of [5G] by offering lower payment plans at first because people could simply refuse [to accept the high price],” said Lee Taek-soo, chairman of Realmeter.

Assuming that today some people do rush out to sign up for 5G, forking out for the expensive phones and signing up for a new monthly payment plan in order to enjoy the content that is available now, will they actually be able to use it?

In many ways, that depends on the mobile carrier.

Buying a 5G phone and signing up for a 5G price plan is just the start - the 5G infrastructure needs to be in place before the network will work.

The areas they cover are mostly concentrated in Seoul and the surrounding area, especially in areas that see a lot of traffic like shopping complexes, KTX stations and airports. This means that 5G could end up being useless, at least for the time being, for people who live in more rural areas.

SK Telecom and KT have built some base stations in major metropolitan cities like Busan, Daegu, Incheon and Gwangju, but LG U+ only has them in Seoul, Incheon, Gyeonggi and Daejeon as of late last month.

To make things worse, 5G requires more base stations than LTE because of its high frequency range and shorter wavelength, making the signal more vulnerable to degradation from longer distances and obstructions within the coverage area.

“It’s natural for a network to have low coverage in the initial phase,” said Kim. “Korea has a history of building networks at a faster pace [than other countries], but it could still be a little early to sign up for 5G.”

Verizon’s 5G launch in the United States on Wednesday covers only parts of two cities - Chicago and Minneapolis - with the plan for full-scale commercialization starting next year.

To assure users, SK Telecom promised to install 70,000 base stations by the end of the year while KT hopes to cover 80 percent of data traffic by expanding the network to less populated regions.

LG says it plans to expand the number of base stations to 50,000 within the first half of this year.

Similar to LTE, experts expect it to take two to three years before the carriers can demonstrate a stable 5G network and infrastructure.