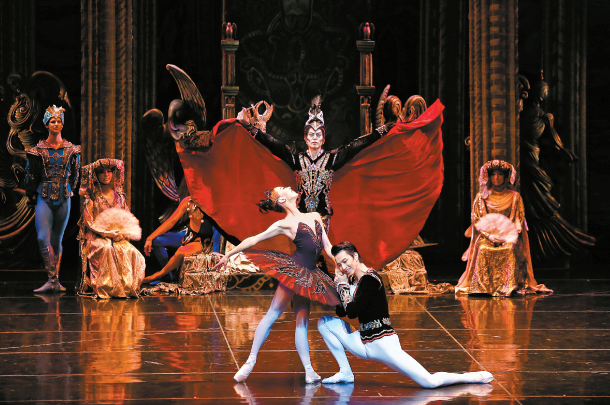 Tchaikovsky’s “Swan Lake” is one of the world’s most popular ballets and has been part of the Universal Ballet Company’s repertory for nearly 30 years. The best known version of this ballet was produced in St. Petersburg at the Mariinsky Theater and choreographed by Marius Petipa and Lev Ivanov. It was the Universal Ballet that introduced the work to Korea in 1992 and since then, the company has been performing Petipa and Ivanov’s version.

To celebrate the 35th anniversary of its establishment, the Universal Ballet Company decided to make changes to the ending of “Swan Lake,” as well as switch the usual partners to update the show for local audiences. The Universal Ballet’s refreshed “Swan Lake” kicks off its nine-day run on Friday at the Universal Arts Center, eastern Seoul.

So how does the new version end?

The scene where Siegfried meets Odette among the swans by the lake in the second act is where a drastic change has been made, the company explained. In the new version, 24 white and black swans appear on stage, presenting a striking contrast one moment and then forming harmony the next. Since the original choreography was created by Petipa and Ivanov in 1895, alterations have been made at various times by the Mariinsky Theater. So far, there have been many different endings, including a happy ending version, where Siegfried and Odette defeat Von Rothbart; a sad ending, where either Siegfried or Odette dies in the end; and an open ending, where the two protagonists can’t lift the curse in this world and leave to another world.

Two years ago, the “Swan Lake” performance by the Universal Ballet had a happy ending. In previous performances, the company often staged the sad ending version, where Siegfried dies and Odette cries over his body.

This time, the company still went with a slightly different sad ending.

The version includes further changes by Oleg Vinogradov, who is currently the head of the ballet company at the Mariinsky, and Bingxian Lui, Universal Ballet Company’s artistic director. The two choreographers decided to kill everyone, except Siegfried, to make the piece more dramatic.

“Almost all dancers prefer the sad ending to the happy ending,” said Hong Hyang-gee, a principal dancer at the company who has been cast to play Odette. “We are confident that the changed ending will be more appealing to European audiences when we perform in Paris in June.”

Universal Ballet Company has been touring many countries showcasing its diverse repertoire, especially its original creations, such as “Shim Chung” and “The Love of Chunhyang,” which are based on Korean love tales. So it came as a surprise when the company received an invitation from Paris asking them to stage “Swan Lake” in June at the Palais des Congres de Paris.

“We know Europeans love watching our performances like ‘Shim Chung’ and ‘The Love of Chunhyang’ because they are very Korean,” said Kim Sei-young, the PR manager of the company. “So we didn’t really expect to be asked to perform ‘Swan Lake’ because it’s such a famous classical piece. We were so proud, though, as we believe the invitation attests the company’s global standard.”

It’s not only the ending that the company attempted to change for its latest “Swan Lake.”

Usually the dancers at the Universal Ballet have specific partners they often dance with. For example, ballerina Kang Mi-sun’s partner is usually Konstantin Novoselov. For ballerina Hong, it’s Lee Dong-tak that she usually keeps steps with. But for this “Swan Lake,” the company decided to switch partners, challenge the dancers and add new feelings to a show the company has performed for decades.

Instead of dancing with Lee, Hong’s partner for the “Swan Lake” is Ma Ming, also a principal dancer at the Universal Ballet who joined the company three years ago from China. Before coming to Korea, he was a dancer at the Liaoning Ballet. The two dancers will perform together at the opening show tonight, and will dance together again on Thursday and Saturday at 7:30 p.m.

To hear more about their new partnership, the Korea JoongAng Daily sat down with the two dancers for an interview prior to the show’s opening. The following are some edited excerpts. 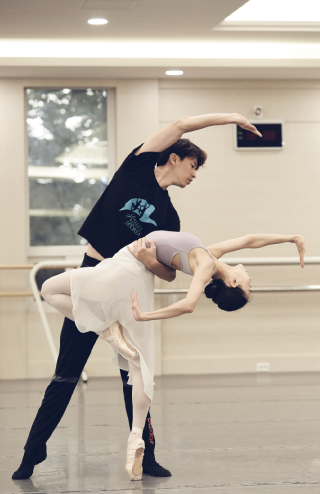 Q. How is the new partnership going?

A. Ming: It’s only my second time performing ‘Swan Lake’ at the Universal Ballet. The first was when I had just joined the company and that was with Hyang-gee, so this partnership isn’t really difficult for me. I just respect Hyang-gee as a dancer. She’s so powerful so I am very honored to be her partner.

Hong: I usually dance with Lee Dong-tak when I do ‘Swan Lake’ I once partnered with Kang Min-woo and also once with Ma Ming. When I first danced with Ma Ming, he didn’t really have emotions so I remember having a really difficult time. I wanted to be absorbed in the character and concentrate on the emotion but when I saw him, he wasn’t with me. So when we were watching a rehearsal together of another ballerino playing Siegfried full of emotion, and I told him to be that emotional as well. But I think he misunderstood me because he started smiling a lot in the performance instead of being very serious, as Siegfried should be. So I was quite stressed back then. But this time, he’s totally different. He really gets the character and he is full of emotions - the correct emotions now. So now I’m confident to dance with him.

‘Swan Lake’ is such a popular classical piece that is so familiar to almost all ballet fans. As ballet dancers, it may be so familiar that it can be boring. What’s the charm of this piece?

Ming: The charm of this piece is that it makes you study and research. Siegfried is a prince and is one of the main characters. He’s an aristocrat that only exists in Western culture, therefore, as an Asian dancer, I have to study a lot and get the feel of how they walk, how they talk, how they love and how they do everything. That really attracts me to this piece.

Hong: For me personally, this piece gives you the most sense of accomplishment. Most ballerinas find ‘Swan Lake’ the most difficult classic piece to perform. You not only have to play two roles, Odette and Odile - the white swan and the black swan - but the choreography itself is very challenging. Because you are a swan, most of the postures and steps are done on top of point shoes. Throughout the performance, you pretty much only use your left leg. So when you are dancing as the black swan in the second act, you feel like your left leg is becoming paralyzed on stage. But you just give everything on stage and after the performance, that accomplishment is beyond words. That’s the charm.

Not many people in the audience will know this, but when the ballerina playing Odette and Odile goes into the second act, we have serious cramps in our left leg. So whenever we go behind the stage, even for just a few seconds, we massage our legs hoping we finish the show without any mishaps. We hardly have time to catch our breath, but still stretch our legs and massage them. 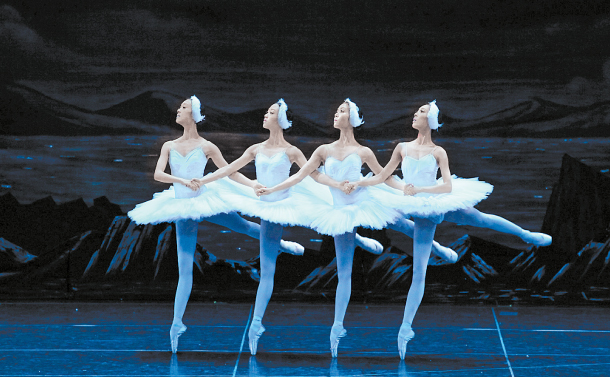 A scene from Tchaikovsky’s popular ballet “Swan Lake.” The latest version by the Universal Ballet Company, which kicks off tonight, is based on Marius Petipa and Lev Ivanov’s choreography with further changes by Oleg Vinogradov, who is currently the head of the ballet company at the Mariinsky, and Bingxian Lui, Universal Ballet Company’s artistic director.

Ming, you have experience at other ballet companies in China like the Liaoning Ballet and the China National Ballet and have performed ‘Swan Lake’ there right? How is that experience and version different to the one done by the Universal Ballet?

Ming: Compared to the previous companies, the repertories here are more traditional because they follow the Mariinsky version. Many of the ‘Swan Lake’ pieces I did at previous companies were retouched by directors but here, it’s very traditional. Moreover, the class itself is very disciplined. For example, in China, when we practiced the scenes in which Siegfried does not appear, I could skip the class and take a rest. But here, you must be present and attend all rehearsals and practices. At first, it was really tough but after a while, I realized that it really helps.

Hong: There are difficulties but there are more pros than cons. First of all, I think it’s really good that I get to use English a lot. I think I’m improving, so I’m less afraid to meet with people from other countries when I go on tour. Moreover, I learn a lot from dancers from other countries. For example, I learn a lot about how to be really immersed in the character, using all the body parts and all the face expressions from a Russian dancer in the company. Korean dancers tend to think about how they will look if they pose a certain way or do a certain facial expression in front of the audiences. We kind of want to look our best regardless of what characters we play. But Western dancers don’t think like that. They really get immersed into the character and I really admire that.

The company is celebrating its 35th anniversary this year. As a dancer of the company, do you have any desires for its future?

Ming: Well, I just fully support whatever the company chooses to do. As a dancer, I think my role is to make sure I take care of myself, don’t get injured and develop constantly. I believe the company has been going in the right direction for the past 35 years, so I have no doubt it will do the same for the next 35 years. I’ll just have to take good care of myself in order to not fall behind.

Hong: I personally hope the company can diversify our classical repertoire. We have a wide repertory when you look at it as a whole - we have original works, we have classical pieces and modern works as well - but for many years, we haven’t had any new classical pieces and I believe it’s time to move a step up in that area.