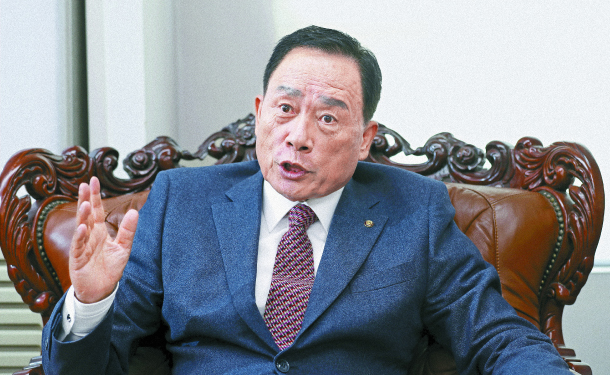 The restaurant business is experiencing its worst economic downturn ever. This is because rent, personnel expenses and price of raw materials have increased one after another and the consumption culture has changed as more people have started to eat and drink alone.

Many statistics prove how serious the situation is. According to Statistics Korea, the production index of the restaurant business in 2018 was 93.7, when in 2015 it was 100. The number has plummeted for two years in a row.

The number in 2018 is similar to that of 2005, when it was 94.2. The Korea Restaurant Business Index from two organizations — the Ministry of Agriculture, Food and Rural Affairs and Korea Agro-Fisheries and Food Trade Corporation — was 64.2 in the fourth quarter of 2018. The two organizations announced on February that it was the lowest since the first quarter of 2016.

Considering economic trends, conditions at restaurants are not likely to improve. JoongAng Ilbo met Jegal Chang-kyun, president of the Korea Food Service Industry Association, an association for restaurants nationwide, and listened to his analysis on the reality of the economy surrounding restaurants and his advice on follow-up measures.

He explained that the implementation of Kim Young-ran Act, or antigraft law, the rise of the minimum wage, the Me Too Movement and changes in how people consume food all contributed to hurting restaurant sales.

In order to solve this problem, he emphasized that owners have to be diligent in both knowing how to manage the store and cook on top of making sure employees get proper education on how to run a restaurant.

He lastly added that restaurant owners are heavily burdened by paying for their employee’s insurance and that the current minimum wage system should be differentiated according to age, region and type of business.
The following are edited excerpts from the interview.

Q. There is a public outcry that restaurants are facing a disastrous situation these days. How is it in reality, as you actually run the association?

A. It is utterly unspeakable. As the companies in the association are having a hard time, it is inevitable that the central association will suffer as well.

Are there any figures that show these hardships?

When the number of companies in our association was at its highest, the number exceeded 420,000. However, now it has fallen to 418,000. The rise in the minimum wage and the reduction of working hours to 52 hours a week, the implementation of the Kim Young-ran Act and the Me Too Movement all were unfavorable factors for the restaurant business.

Where do the members of the association stand among the self-employed?

Almost 70 to 75 percent of the members are self-employed, small business owners. If the owner has a high level of education and the size of the store is big enough, many do not rely on the association and run their business on their own. Lonely people who have no one to lean on mostly depend on our association.

Why are restaurants not doing well?

First of all, due to the Kim Young-ran Act, the unit price of food per consumer has drastically decreased. In addition, due to the Me Too Movement, employees of companies rarely have dinner together after work. As sexual crime happens at these occasions, many companies have gotten rid of these get-togethers. To make matters worse, the minimum wage has increased 30 percent over two years. This is practically a death sentence for small-scale restaurants.

How serious is it?

According to the Korea Food Service Industry Research Institute, an affiliated organization of the association, 60 percent of restaurant owners earn less than the monthly wage of restaurant employees. Even though the owners come to work earlier and work even harder, the reality is harsh for owners. Working hours for owners are 1.3 times longer than that of employees on average, and the workload of owners is 1.1 to 1.5 times heavier than that of employees. Notwithstanding, A couple that owns a [restaurant on average] earns less than 4 million won ($3,518) a month. Something is really going wrong.

But isn’t the consumption trend unavoidable?

Of course it is. Since people tend to eat and drink alone, the size of the market for ready-made food eaten at home already amounts to 3 trillion won ($2.6 billion). The number of large corporations letting their employees work freely regardless of commuting time has continued to increase, and we cannot do anything about it. However, this trend immediately harms restaurant sales, which total 75 trillion won a year.

From another perspective, there are too many restaurants.

It is true. The number of eateries in Korea totals around 700,000. It means for every 65 people in Korea, there is one restaurant. Even though people buy two meals a day, it is still hard to run a restaurant. However, the reality is different. There are people who eat meals at home or pack their meals from home in a lunch box. The number of restaurants is the same as in Japan, so Korean restaurants are competing under pressure that is 2.7 times higher than in Japan.

Then this means the number of restaurants should be reduced a bit.

That is why we called on the government to not allow the report system, which allows people to open a restaurant as soon as they report to the government, but rather allow a permit system where people have to get permission from the government, as it was done in the past.

That is the problem. Self-employed workers, especially those who run small eateries, are doing this job because they can’t do any other job. If they quit this, they have nothing to do. What is more, they lose all the investment they made for a long time. Furnishing, premiums and even the signs they hung on the store will all disappear. The owners are hanging in there because they have no other choice.

What is the most important part of running a restaurant?

First and foremost, the food has to be tasty. But running the restaurant well is also crucial. The owner has to manage the employees well. The CEO of the restaurant has to diligently look at the prices of materials and go to markets to get high-quality goods. If the CEO becomes lazy and complacent, customers notice right away and do not visit the restaurant anymore.

Isn’t it hard to learn both how to cook and manage people, as well as the store, at the same time?

Yes it is. Basically, those who run an eatery must receive education about the restaurant business and look for information and books and participate in on-site events. Even though the owners fail, they can get back on their feet soon because they know something. When I first started a Chinese restaurant, the chefs were very territorial.

Although I was the CEO, they did not let me in the kitchen and decided on the ingredients without consulting me. I did not know how to cook, so it was natural. Additionally, it was not easy to manage the labor force. If I gave [them] temporary pay, many did not show up the next day. So every time those incidents happened, I went to the market at dawn, found a person to work and maintained my business.

Restaurants seem to be in a difficult situation. Are there any possible solutions?

The most desirable solution is for the economy to revive and the market to become larger. However, it seems the trend is not heading toward that direction, so we need to prepare for the future in other ways. Those who attempt to open a restaurant need to be as thoroughly ready as possible. If anyone opens a restaurant because there is nothing else to do, and doing something is better than doing nothing, their business will 100 percent fail. In order to solve this, proper education should be provided.

Is there any education going on right now?

Legally, six hours of education is given, and it is mostly delivered through the internet. The education is all about learning how to prevent food poisoning through the Food Sanitation Act. How could aspiring restaurant owners learn about food or management in this short period of time? On top of that, after education, there is no examination to measure the knowledge of these aspiring owners. Anyone can open a store if they log in and watch the education material, so the education is meaningless. If the education hours are lengthened to three days, the risk of failure will be smaller when entering the market. The government urgently needs to elevate the quality of education.

Yet isn’t it hard for all the existing restaurants to survive?

That is the key point. As the market becomes smaller and customers don’t go to restaurants [as much] anymore, the cost of management is increasing. Although most restaurants have customers until late at night, not many employees are left until night due to the reduced working hours. Stores that have less than four employees are the only exception. The minimum wage was raised so quickly that we cannot [keep up with] it. If many restaurants close down due to an economic downturn, it not only harms the owners but also leads to a waste of resources in society as a whole.