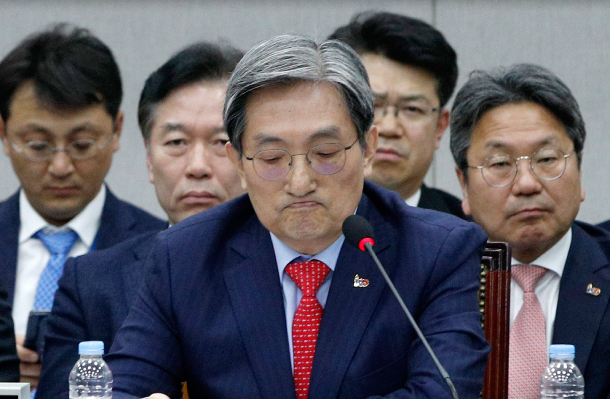 Presidential Chief of Staff Noh Young-min attends a hearing at the National Assembly’s House Steering Committee on Thursday. Noh issued an apology for the recent fiasco in minister nominations at the hearing. [NEWS1]

The main opposition Liberty Korea Party (LKP) managed a political rebound from crushing defeats in the 2017 presidential election and 2018 local elections in the latest by-elections, while the smaller Justice Party gained a crucial seat.

Two vacancies in the National Assembly were filled through the by-elections Wednesday to choose lawmakers to represent Seongsan District in Changwon and Goseong County in Tongyeong, both located in South Gyeongsang. Three local legislative council members representing a district in North Jeolla and two districts in North Gyeongsang were also elected.

Yeo Young-guk of the Justice Party won a narrow victory in Seongsan against his LKP rival, although he was backed by the ruling Democratic Party (DP). The Justice Party and the DP consolidated their candidates last week to unite liberal votes.

Yeo won only by 504 votes, according to the National Election Commission. He scored 45.75 percent of the votes, while his LKP rival, Kang Ki-youn, scored 45.21 percent.

In Goseong of Tongyeong, Jeong Jeom-sig of the LKP won with 59.5 percent. His DP rival recorded 35.99 percent.

The Justice Party will now occupy six seats in the National Assembly and the LKP 114. The DP is currently controlling 128.

In the three by-elections for local council members, the Party for Democracy and Peace (PDP) scored a victory in a district in Jeonju, North Jeolla, its traditional stronghold. The LKP won two other districts in North Gyeongsang.

The mood was tense in the ruling party and the Blue House.

While the presidential office had no official reaction, the DP’s floor leader, Rep. Hong Young-pyo, said Thursday that “We will humbly accept the people’s sentiments displayed in the by-elections.”

Anther DP lawmaker said the party’s defeats even in the local council by-elections were because of the Moon Jae-in administration’s failure to resolve economic issues. “It’s a warning about the economic crisis and appointment fiasco,” he said.

Later Thursday, presidential Chief of Staff Noh Young-min attended a hearing at the National Assembly’s House Steering Committee and issued an apology for the recent fiasco in minister nominations. “I apologize to the people for causing concerns over the appointment issues,” Noh said. “We will be more prudent in making nominations and strengthen vetting to meet the people’s expectations.”

It was Noh’s first apology for the reshuffle crisis. Of seven ministers nominated in March, one voluntarily resigned and Moon withdrew the nomination for another after skeletons surfaced from their pasts.

LKP Chairman Hwang Kyo-ahn was ebullient. “The people made a stern judgment on the Moon administration,” he said. “The election outcome is the people’s order to the administration that it must change its wrong-headed policies.”

He stressed that it was noteworthy that the LKP’s defeat in Seongsan, a traditional stronghold of the liberals, was so narrow. “The DP and the Justice Party formed an electoral alliance to field one candidate,” Hwang said. “And yet, they scored only a narrow victory against us. This shows that the people will no longer accept the arrogance and high-handedness of this administration.”

Hwang said the LKP is even more hopeful it will win next year’s general election. This week’s by-elections were Hwang’s first test, after starting his political career in February by winning the chairmanship of the conservative party in the aftermath of the impeachment and ouster of former President Park Geun-hye.

The sentiment, however, quickly changed in the region, as the LKP concentrated its campaign on blaming the Moon administration for poor performances in the economy, in particular.

The Justice Party, after gaining one seat on Wednesday, was sanguine that it will soon restore its position as a negotiation bloc inside the legislature. As of now, the National Assembly has three negotiation blocs - the DP, LKP and the Bareunmirae Party.

A negotiation bloc requires at least 20 lawmakers and gives a party stronger powers in National Assembly activities to negotiate bills and legislative calendars. The party also gets a bigger financial subsidy from the state.

“After forming a negotiation bloc with the PDP, we will play a role to normalize the stalled legislative operation,” said Rep. Youn So-ha, floor leader of the Justice Party, said Thursday.

It remains to be seen if the plan will be followed through, however. “There are more lawmakers who oppose the alliance,” said Rep. Chang Byoung-wan, floor leader of the PDP. “We only have one year left before next year’s general elections. The National Assembly’s focus will shift to elections from passing bills.”

Speculation is growing that the PDP was preparing for an alliance with some lawmakers from the Bareunmirae Party. The alliance, if realized, will produce a party with strong backing from the Gwangju and Jeolla regions, and a coalition with the Justice Party won’t be restored.