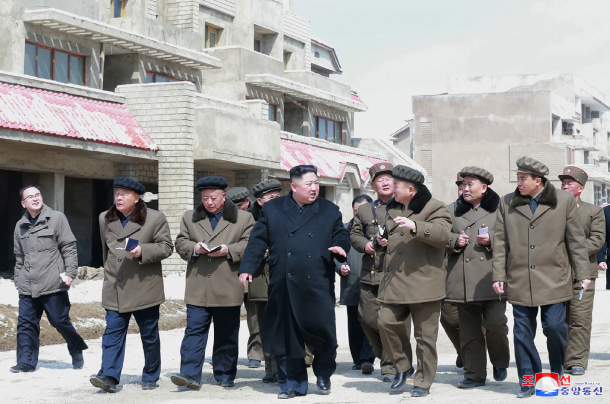 North Korean leader Kim Jong-un visited Samjiyon, the county that is home to Mount Paektu, state media reported Thursday, fuelling speculation that he may be on the brink of taking an important action, since earlier visits to the area usually preceded landmark decisions.

The Korean Central News Agency (KCNA), one of the North’s leading propaganda mouthpieces, reported that Kim visited construction sites, potato and soft drink factories, as well as a middle school in the county.

Kim expressed great satisfaction at construction in the area, the report said, and ordered that Samjiyon be made into a city where “modern civilization” is encapsulated - and the wealthiest county in the country by the 75th anniversary of the ruling Workers’ Party’s foundation in 2020.

Development of Samjiyon “is a fierce class and political struggle against the hostile forces seeking to check the advance of” North Korea, Kim said, according to KCNA’s English edition, adding that “victory in the construction would be a demonstration of its might and economic potentials.”

This emphasis on economic production and development dovetails with rhetoric coming out from the North recently that has stressed self-reliance in the face of a protracted standoff with the United States over sanctions.

But the importance of the visit, according to analysts, lies not in Kim’s words, but in what it suggests about upcoming decisions.

Samjiyon is home to Mount Paektu, the mythical origin of the Korean people and the supposed birthplace of North Korea’s previous leader, Kim Jong-il, and it was visited by Kim Jong-un on several occasions since his rise to power in 2011 - usually when he faced major decisions or had a symbolic purpose in mind.

Following a visit to the county in November 2013, Kim purged his uncle and potential political rival, Jang Song-thaek, thus consolidating his rule over North Korea’s elite. His next visit, in November 2014, came only days before the third anniversary of his father’s passing and a speech he made in which he showed willingness to improve relations with the South and hold an inter-Korean summit.

In June 2016, he came to Samjiyon immediately following the country’s fifth nuclear test, which it later claimed was to test a warhead to attach to an intercontinental ballistic missile.

Kim’s two visits to the county last year both took place within a month of the first U.S.-North Korea summit in June and the third inter-Korean summit in September, through which he made a promise to undertake denuclearization for the sake of economic engagement with the world.

With this latest visit - the first in five months - coming just over a month after the failure of his summit with U.S. President Donald Trump in Hanoi, Vietnam, from Feb. 27 to 28, Kim may be signaling a new course of action, which could very well come in the form of a new missile test, based on the North’s recent restoration of a launch pad on its western coast.