Start-ups can revitalize Korea’s sluggish economy, the Seoul city government said as it announced on Thursday a plan to inject 1.9 trillion won ($1.6 billion) into the start-up sector by 2022.

“Our national economy is at risk, and we are making a choice out of sheer necessity to help people survive,” said Seoul Mayor Park Won-soon in a press briefing at Seoul City Hall on Thursday. “It is an investment for the future, one that will help the local economy take a leap forward. Seoul will lead global economies through an ecosystem that welcomes and supports young, bright minds from both Korea and abroad to turn their ideas into products.” 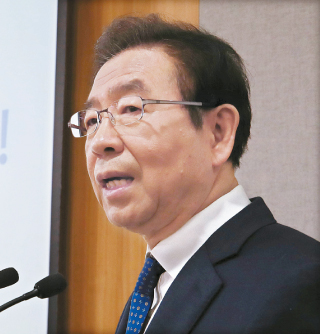 The Seoul city government’s investment comes in two parts. The first is focused on education and training. The city government is planning to train 6,400 people into 2022 on artificial intelligence (AI), blockchain, big-data analytics and other technology.

“We plan to set up innovation academies, not unlike Ecole 42 of France, within Gaepo Digital Innovation Park in cooperation with the Ministry of Science and Technology,” Park said. “The city government will also be working with universities to run training programs on the new technology.”

Part two of the investment plan is to create a physical space for innovation.

“The key is help start-up entrepreneurs go from idea to product faster,” said Jo In-dong, head of the economic policy bureau of the Seoul city government. “One of the biggest problems that start-up entrepreneurs face is a lack of funding. We are hoping to meet their needs through direct investments into some 2,000 start-ups in Seoul in the early stages of their product development by 2022.”

The city government is also working with the Ministry of Justice to ease the visa process for foreigners establishing start-ups in Seoul.

“We have an existing fast-track visa process for start-up entrepreneurs called Oasis, short for Overall Assistance for Start-up Immigration System,” said Choi Pan-kyu, director of the investment and business incubation division of the city government. “It’s a training program, and successful trainees are able to obtain a visa as an entrepreneur here. We are hoping to shorten this process so that entrepreneurs can gain visas to work in Seoul within a week of their application.”

The Seoul city government said it is also looking to export entrepreneurs to start-up hubs in Silicon Valley, Tel Aviv and London, and added that it will host a week-long conference in the first week of September every year for start-up engineers and entrepreneurs from in and outside of Korea to network and share ideas.