Bento’s Boys climb to No. 37 in FIFA world ranking

Bento’s Boys climb to No. 37 in FIFA world ranking 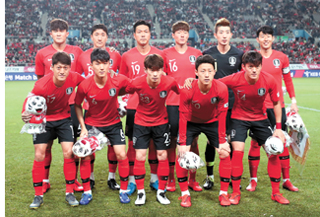 Korea, coached by Paulo Bento, earned 1,462 points, up 11 points from February, to reach 37th in the April men’s football rankings. In the February rankings, the Taeguk Warriors shared 38th place with Iceland.

Bento’s side edged out Bolivia 1-0 and beat Colombia 2-1 in their friendly matches at home last month. Colombia was placed 12th in the April FIFA rankings, while Bolivia reached No. 63.

Korea remained the third-highest ranked team in the Asian Football Confederation, behind Iran (No. 21) and Japan (No. 26). Australia followed Korea at No. 41, while the reigning AFC Asian Cup winner, Qatar, took the No. 55 spot. North Korea was ranked at No. 121.