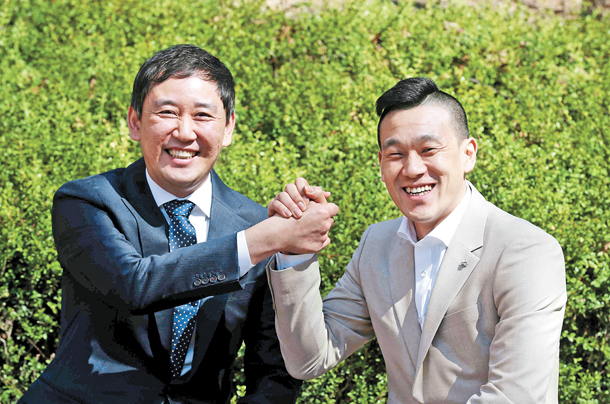 The two first met as professional players in 2000 when they both played for the Daejeon Samsung Fire & Marine Insurance Bluefangs. After playing for the Bluefangs for 10 seasons, the pair reunited in 2013, playing for the Skywalkers.

Choi retired after the 2014-15 season and their 14-year partnership came to an end.

Except it didn’t. Choi immediately returned to the Skywalkers as head coach the following season. Yeo stayed on the court, but became a playing coach for the team.

After years of playing together on the court, Yeo is used to calling Choi hyung, an informal Korean word for older brother used by men to refer to older male friends. Things changed when he took over in 2015, and Yeo has now grown accustomed to addressing Choi as head coach.

Despite having no experience as a coach, Choi was promoted straight to the top when he retired. There were concerns over his ability, but Choi didn’t waste any time proving himself. In his first season as coach, Choi successfully led the Skywalkers to win the regular season, and in the 2016-17 season, he led the club to win their first championship trophy in 10 years.

After a disappointing runner-up finish at the championship last year, the Skywalkers once again excelled this year, reclaiming their title.

Choi credits this year’s success to his old friend Yeo.

As the Skywalkers’ veteran libero, Yeo is now 40 years old and splits his role with Ham Hyung-jin throughout the regular season. In the postseason, Yeo got actively engaged in the series by picking up serve receives and digs.

“Although I had less playing time during the regular season, I was well prepared because I continuously played,” Yeo said.

Although the Skywalkers seemed dominant in their championship series, for Choi, it was a shock as he didn’t think the club would win three straight games. This was Choi’s second championship win as head coach.

“This season, we had a lot of injuries from players like Moon Sung-min, Jeon Kwang-in and Shin Young-suk,” Choi said. “I was not expecting three straight wins in the championship series. Since it was such a hard process, I think our win is more valuable.”

Yeo also set a new record during the championship. Since the KOVO was first founded in 2004, a total of 15 championships have been held. Yeo competed in 14 of them, winning nine.

“He keeps on following me,” Choi said.

“We have a lot of stars on our team,” Choi said. “So we need to take better care of them. But I don’t really need to worry that much because coach Yeo takes care of all that.”

Now that the season has officially ended, the KOVO’s free agent market has opened up and Yeo is one of many free agent players. Although it’s possible that he could sign with a different club this year, Choi is not really concerned and is already set for another successful season.