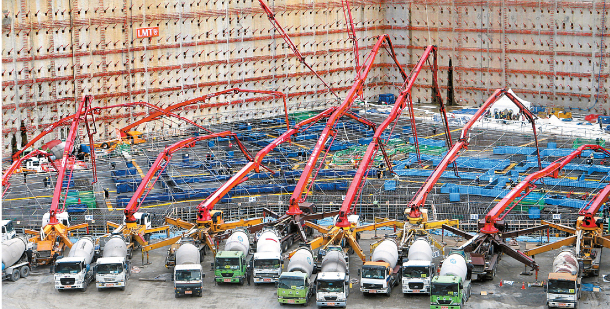 The foundation is being poured at a construction site of a skyscraper in Haeundae District, Busan, in November 2016. [JOONGANG ILBO]

Korea’s construction industry is falling fast in the global rankings.

Since the Moon Jae-in administration took office, the country has dropped from sixth place to 12th place in a construction competitiveness survey of 20 countries conducted by the Korea Institute of Civil Engineering and Building Technology.

As the construction industry is vital for the national economy, many observers say countermeasures are urgently needed.

The ranking not only measures the ability of construction companies to compete on the global stage but also covers government policy and regulations. 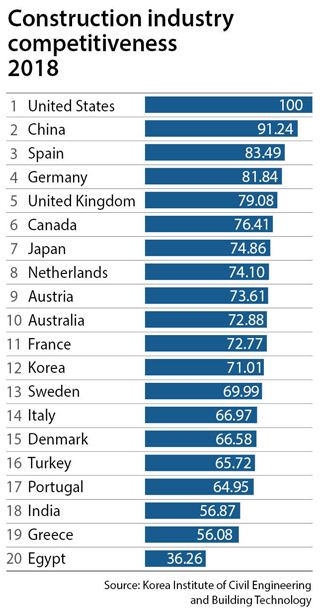 Korea ranked number six in 2016. It lost three spots the following year, and as of 2018 was in 12th place. It is the first time Korea is out of the top 10 since the institute started assessing competitiveness in 2011. Korea was ranked ninth in 2011.

The United States took first place in 2018. It was followed by China, Spain, Germany, Britain and Canada. Experts say that No. 1 United States is competitive in design and No. 2 China excels at building.

Japan took seventh place, five steps higher than Korea. The country took 11th place in 2011 and has been consistently rising in the ranks. In 2016, it overtook Korea.

According to the institute, Korea is stuck between advanced countries with cutting-edge technologies and latecomers competing on price.

Korea has been especially weak in overseas sales, both in construction and design. Overseas sales between 2016 and 2018 fell 20 percent.

“In a variety of categories, it was rated low, including transparency in the public sector, the level of awareness on corruption, the safety of the construction environment as well as obtaining both resources and labor and the availability of distribution infrastructure,” said Park Hwan-pyo, principal researcher at the institute.

Since the construction industry is a pillar of the Korean economy, the rapid decrease of competitive power is all the more serious. According to the Ministry of Land, Infrastructure and Transport, the industry’s contribution to GDP was 39 percent in 2017. The sector’s exports from 2007 to 2016 totalled $537.7 billion, more than semiconductors exports at $499.1 billion, and shipbuilding exports at $413 billion.

Globally, construction is a steadily expanding industry. According to IHS Markit, a London-based market research company, the size of the world’s construction market was $10.222 trillion in 2018. It has been growing at about 3 percent a year, a trend seen continuing beyond 2030.

To recover the global competitiveness of Korea’s construction industry, the institute emphasized that it is necessary to invent “smart” construction technologies to prepare for the fourth industrial revolution. Smart construction technology rapidly increases productivity and safety by utilizing cutting-edge IT, including the Internet of Things, big data and robotics.

Arguments have also been made that construction companies should transition to investment and development and move away from simply winning building contracts. In order to make the move, companies need to improve their fundraising abilities. Project finance capabilities are especially important. The government has been urged to develop a long-term plan for market entry through diplomatic efforts. It should also invest in training that is focused on foreign business development.

Due to the reduction of the workweek to 52 hours, many worry that domestic companies might lose the competitive edge in foreign construction markets, so the government should find a middle ground with the industry. The industry argues that the calculation period for averaging the workweek should be lengthened from six months to a year.

Academia is offering a variety of solutions to improve competitiveness.

“Restrictions that exist only in Korea should be lifted,” said Lee Sang-ho, head of the Construction & Economy Research Institute of Korea.

He said that the problems are: that design and construction are divided; that the sector only has general companies and specialized company; and excessive subcontractor restrictions.

Lee said construction company executives should embrace entrepreneurship. Many construction companies focus on maintaining the status quo. The founders have worked hard to establish the business, and their children and grandchildren have managed the companies without being given a challenge. He said these executives should continue innovating through mergers and acquisitions.

“Recently Google signed a contract with Toronto, Canada, and started its smart city construction business,” said Kim Jae-jun, a professor in the department of architectural engineering at Hanyang University. “Google is creating a new type of city based on neural networks using IT technology.”

Chronic corruption may also hinder innovation in the construction industry, and it should be rooted out, some critics suggest. As well, society should stop looking down on construction engineers.