Tens of thousands sign up as 5G kicks off

Tens of thousands sign up as 5G kicks off 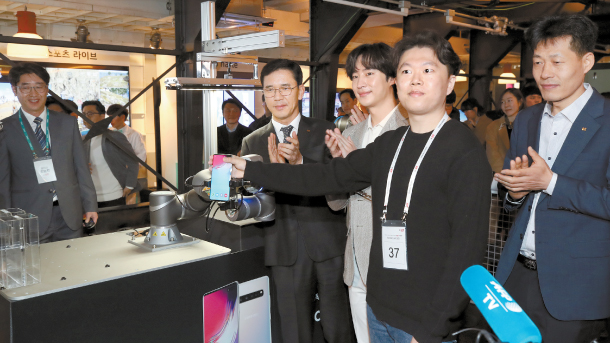 Oh Won-chang from Seongnam, Gyeonggi, receives his 5G smartphone from a robotic arm at KT’s pop-up store in Gangnam, southern Seoul, on Friday during the telecommunications company’s launching event. [YONHAP]

Korea became the first country in the world to commercialize 5G on Wednesday evening, beating Verizon by just 55 minutes. Korean carriers activated the network two days ahead of the scheduled launch, while Verizon activated its network a week ahead of its publicly announced launch date.

Korea’s three mobile carriers - SK Telecom, KT and LG U+ - held celebrations Friday morning with the help of celebrities, sports stars and early adopters who waited in line to get their hands on the Samsung Galaxy S10 5G, the first 5G mobile phone on sale in the world.

SK Telecom held an event at its branch in Gangnam, southern Seoul.

Joined by figure skater Kim Yuna - who is among the few handpicked subscribers to have access to the network on Wednesday - visitors were able to experience the Magic Leap One augmented reality headset and HoloBox, an artificial intelligence assistant based on the carrier’s Nugu platform with a holographic display.

KT also held a similar event in Gangnam. Attended by actor Lee Je-hoon, a hundred visitors were invited to join the celebration. LG U+ celebrated on Thursday night at its popup store in Gangnam, where visitors could stream videos featuring K-pop stars using the 5G network.

“I’m glad I will be able to appear on [users’] phones in a more vivid way,” said singer Chungha at the LG U+ event.

The intense battle to claim the “world’s first” 5G bragging rights between Korea and the U.S. doesn’t appear to be ending any time soon.

After learning of Verizon’s plan to secretly launch its 5G network on Wednesday, the Korean government worked with Samsung and the local mobile carriers to quickly bring forward the release date and activate the network. At the time, only a handful of celebrities - including figure skater Kim and singers Baekhyun and Kai from the K-pop act Exo - and hand-picked honorees had been given pre-release versions of the Galaxy S10 5G.

“We launched a network and made 5G devices available for any customers that wanted them. We had devices in stores in Chicago and Minneapolis and available for purchase online.”

Verizon activated the network to general public in partial areas of Chicago and Minneapolis.

Industry insiders in Korea argue that Verizon’s effort to claim the 5G title is based on an add-on modem that has to be plugged in to Motorola’s 5G-upgradable phone. There are no 5G phones available in the United States.

Putting the battle aside, Korea hopes to become the world leader in the 5G era.

“We’ve proven [Korea] is the strongest nation for information and communications technology through the commercialization of the world’s first 5G network,” said Minister of Science and ICT You Young-min Thursday. “As we’ve stepped ahead of other countries to be able to lead the 5G era, we will do our best to develop as the 5G powerhouse.”