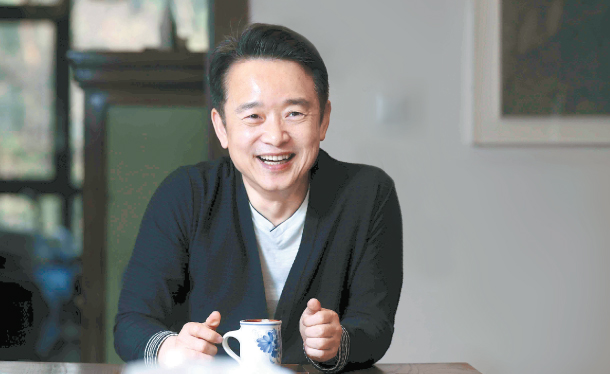 Nam Kyung-pil, the former governor of Gyeonggi, shares his decision to leave politics to create a start-up in an interview with the JoongAng Ilbo on March 30 at his home in Yongin, Gyeonggi. [KIM SANG-SUN]

“I am leaving politics, where I devoted my youth,” Nam, 54, wrote on his Facebook account on March 29. “I am starting a start-up.”
At 54, Nam already served as a member of the National Assembly for five terms and was appointed governor of Gyeonggi. He was unusually young, 33, when he went into politics in 1998.

Nam was first elected to the National Assembly in a by-election in 1998. His father Nam Pyeong-woo was a representative of the conservative New Korea Party, the predecessor of today’s opposition Liberty Korea Party. Nam’s father died in office in 1998. Nam won the by-election to fill his father’s seat representing Suwon, Gyeonggi.

Below are edited excerpts from the interview with Nam on March 30 at his home in Gyeonggi.

Q. In your biography published in 2017, you said you found politics interesting.

A. Politics made my heart beat and start-ups do now. I want to live doing something that makes me feel the same way.

What do you mean when you say that start-ups make your heart beat?

When I was governor, my heart would beat fast whenever I met businessmen. I always said that they are patriots who make money in a legitimate way, pay taxes and create jobs: now I also want to become a patriot.

What kind of start-up are you planning to make?

I am making a health care start-up that will help people become healthy called Modoo Health. When I went to Tokyo, I thought I would stay there for six months and go to study in Berlin, Germany for another six and return to Korea in November to participate in the general election. But after I studied blockchain and spoke with people who worked for international businesses and start-ups along Teheran Street in Gangnam District, [southern Seoul], I started to change my mind.

Don’t you feel reluctant to leave politics, where you have been working for 20 years?

You need to throw away things in order to get new ones. Of course I was scared at first — I knew nothing other than [politics] — but what can I do? My heart beats.

You talked about rebuilding Korea.

I want politicians to dream of doing that. Sadly, politicians’ downfalls are repeated, and recently, presidents are going to prison. Opposing parties are not enemies. In a way, they are comrades within Korea. I think former presidents Kim Young-sam and Kim Dae-jung carried out this idea. Labor, finance, welfare, the relationship between the two Koreas, diplomacy and education cannot be solved in the period of one regime or by a single faction. We are about to come into a crisis. Instead of losing sleep by worrying, I am losing sleep over anger: I sincerely want politicians to sympathize and reach an agreement when the crisis comes.

What do you want for politics?

I want democrats to be in politics. By democrats, I mean people who to admit they are not perfect and [acknowledge that they] have room for error. They also need to know that people are not wrong, but different. The most difficult obstacle in my political career was not Sim Sang-jung of the liberal Justice Party, who was my competitor for governor of Gyeonggi in 2014. The most difficult people are the people who think they are always right. In order to agree on the direction that we will follow for the future, we must be able to negotiate on the means to achieve it. Another thing that we need is to put the country first over individual and personal needs.

What do you think about politics these days?

I think the biggest problem is that finger-pointing has become the norm in politics, where politicians make their opponents their targets. This kind of politics will be both parties’ downfall. People in power inevitably become the targets of others, [a never-ending cycle].
Politicians should acknowledge their differences and think of their country first, even if it is a boring style of politics. The problem therein is that these kinds of political leaders have been unsuccessful in seizing power — this system needs to be changed.

Couldn’t you change it yourself?

I failed. I was conflicted about whether I should remain in this political system that requires politicians to vent their hatred in order to gain power or to find another path. I couldn’t change the system, even when I was the governor of Gyeonggi. I said that politics is great out of my love for it, but that is all there is to it.

People don’t believe politicians when they say they are retiring.

I think people believe them these days. People don’t believe politicians when they say that they will retire and live in caves, mountains or go overseas. When I said I would create my own start-up, people must have thought that I wouldn’t come back once I become successful.

In reality, many people who retired from politics returned, including Kim Dae-jung.

I will make something big with my start-up. Although we are starting small, we have a [big] dream: I want to create a new paradigm in [Korea’s] economy.