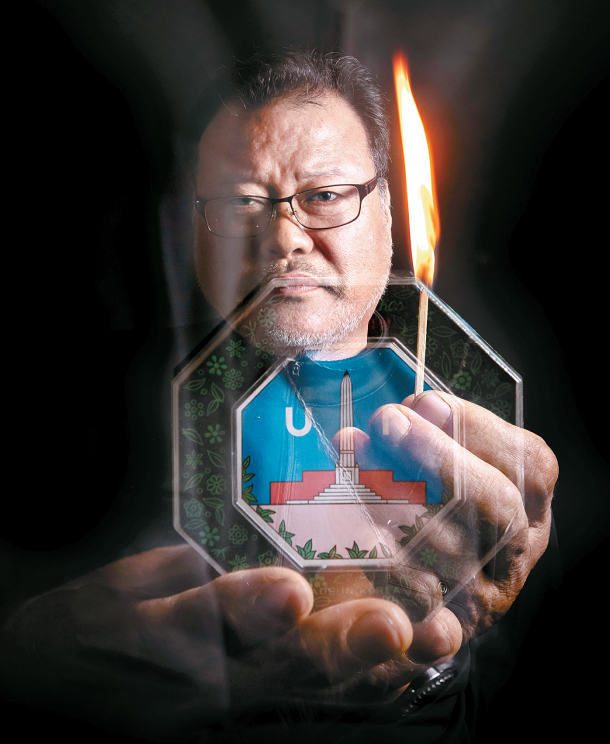 Hwang Ki-seok, the CEO of the last match manufacturer in Korea, strikes a match. [JEON MIN-GYU]

Hwang Ki-seok, 62, is the chief executive of the last match manufacturer in Korea, the UN Trading Company.

Located in Asan, South Chungcheong, the factory has a floor space of 530 square meters (5,704 square feet) and still manufactures about 250,000 matchsticks a day. Decades-old machines creak as 3.15-inch sticks are stuck into an iron plate with 2,000 holes.

Matches were introduced in Korea in the late 19th century. Koreans first called it inchon, which means goblin fire in traditional Korean characters. Matches were a product of modern civilization, and the match business thrived.

About 300 factories were in Korea by the end of its liberation from Japan’s colonial reign in 1945. Matches were popular as housewarming gifts and were also used as collector’s items.

Hwang was born on a farm in Yeongju, North Gyeongsang. The eldest of six siblings, he worked for a match factory ever since his late teens.

“At that time, there were only two factories in Yeongju, a match factory and a silkworm factory. Daily wages were 200 won [$0.18], but if you consider that a bag of rice is about 3,000 won, it was a considerable amount,” said Hwang.

The market for matches went downhill ever since gas lighters were introduced. Hwang kept making matches even after neighboring factories closed down one by one.

“I think I can continue making matches for 10 years,” said Hwang. “After that, nobody knows what will happen. There is no one who wants to learn the trade.

“I think the worst is over. Two years ago, demand started to grow. Young designers frequently visit [my factory] and ask me to make fancy goods for them. Maybe this is due to the return to a retro style and that scented candles are becoming popular. Because of this, match orders are increasing as well.”

Below are edited excerpts of the JoongAng Ilbo’s interview with Hwang.

Q. Matches are your life, aren’t they?

A. I knew nothing else. Starting in Yeongju, I went to Yongin [in Gyeonggi] and Busan, returning to Yongin, then Pyeongtaek and finally to Asan seven years ago. I followed match factories all my life.

How did you open your factory?

I was working at the UN Trading Company, which closed due to bankruptcy in 1997. Three employees and I managed to get our hands on a machine, so we opened a new factory. I thought [the business] would go well, but things didn’t go as planned.

I remember the octagon-shaped UN matches.

We don’t make them anymore. The ones that are sold online are Chinese fakes. I still have about 10,000 matchboxes. The only people who seek them out are the occasional old people who want to reminisce about the past. There was a time in the 1990s when I would sell enough matches to fill an 8-ton truck every a day.

Are there people who still use matches?

The demand for matches for presents and miniature matches for advertisements have stopped. Now, I make matches for cakes. I make about 250,000 matchsticks a day. When times were good, we used to have 400 employees, but now we have six.

Are matches easy to manufacture?

It takes about a day to make them. First, you have to spray paraffin on the sticks, stick a bit of gunpowder on it and dry it. Machines help with the process, but there is still a lot of work to do by hand.

Can you live on the profits from making matches?

No, I also used to make toothpicks and deliver them to Chinese restaurants for over 10 years. Because of the competition, I had to give that up, too. These days, my most profitable product is a wooden hook used to hold the stems of watermelons, strawberries and peppers. Farmers used to use plastic hooks, but they were cumbersome to retrieve. There is also the issue of polluting the environment. I even made four patents related to wooden hooks and paid off all my debts. Maybe this success was because I was desperate and living in poverty.

Why do you keep making matches?

It is because of their unique appeal. There is a warm feeling that is emitted when a match is struck. It is a feeling of longing that cannot be felt through a lighter. I hope the “goblin fire” I made helped a lot of people. That is all that matters. I will keep making matches until I die.