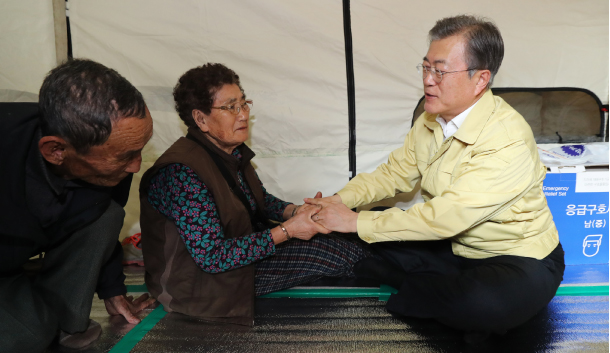 President Moon Jae-in, right, meets with elderly victims of a massive fire who are taking refuge at a high school in Goseong County, Gangwon, in a visit to the area Friday afternoon. [YONHAP]

The main opposition party faced fierce criticism on Friday for stopping a top presidential official in charge of national crisis management from leaving a hearing Thursday evening to go deal with massive forest fires in Gangwon.

Lawmakers of the ruling Democratic Party (DP) said Friday that the Liberty Korea Party (LKP) refused to let Chung Eui-yong, director of the National Security Office, leave the National Assembly hearing on Thursday, despite their repeated requests to let him go.

The wildfires in Gangwon were first reported around 7:30 p.m., but Chung was only able to leave the hearing three hours later after answering questions from opposition lawmakers.

The National Assembly’s House Steering Committee held a hearing with top government officials on Thursday. The Blue House officials started their reports to lawmakers around 3:30 p.m., and a recess took place around 7:45 p.m. Around that time, news broke that forest fires were raging Goseong County and Sokcho in Gangwon.

Following dinner, the committee resumed its hearing at 9:20 p.m., and Rep. Hong Young-pyo of the DP, the chairman of the committee, asked Chung for an update on the wildfires.

“Fires started in Goseong,” Chung replied. “Winds are blowing east, and the fires are now spreading into downtown Sokcho.”

Kim You-geun, first deputy director of the National Security Office, then returned to the Blue House, but Chung remained.

The DP lawmakers said they wanted Chung to return to the Blue House to cope with the wildfires, but the LKP demanded that he stay and take one question from each lawmaker. Chung then took questions only from opposition lawmakers.

Around 10 p.m., the DP lawmakers once again requested that the LKP allow Chung to leave.

“We asked the opposition party to allow Chung to leave, but it rejected this,” Hong said during the hearing. “Massive forest fires caused civilians to evacuate, and I cannot understand why the official responsible cannot leave this session.”

Rep. Na Kyung-won, floor leader of the LKP and a member of the committee, responded by saying, “We want Chung to leave soon. Chung must stay and take one question from each lawmaker, while other presidential secretaries are allowed to leave.

“If the ruling party allowed opposition lawmakers to ask questions first, Chung might be able to leave the hearing sooner,” Na said. “But this is a rare opportunity to question Blue House aides.”

Chung, then, answered questions from Na and LKP Rep. Khang Hyo-shang. Another LKP lawmaker, Song Seog-jun, took his turn and continued to make remarks for over 10 minutes. Committee Chairman Hong then stopped Song by saying, “You are going too far. Turn on your monitor and look at the urgent news reports.”

The ruling and opposition lawmakers bickered, and Rep. Lee Man-hee of the LKP finally said, “We should let him go.”

Chung stood up and left the room around at 10:38 p.m., while presidential Chief of Staff Noh Young-min stayed for another hour and left at around 11:30 p.m.

After facing public criticism, Na told reporters on Friday that she was not aware of the seriousness of the forest fires.

“They should have reported the seriousness of the situation to us and asked to leave, but they didn’t,” Na said. “I had difficulty understanding the situation properly.”

She also complained that the media was making biased reports to criticize her.

The Blue House said Friday that Chung’s absence did not hinder the government’s efforts to fight the disaster.

“Mobilizing firefighters and countering fires are not something you can do by making top-down orders,” said Ko Min-jung, deputy presidential spokeswoman. “The Central Headquarters of Safety and Countermeasures Against Disasters grasp the situation and immediately respond.”

Meanwhile, leaders of the main political parties visited Gangwon one after another.

LKP Chairman Hwang Kyo-ahn and other party officials arrived at Goseong around 8:30 a.m. on Friday and visited Sokcho at 10 a.m.

DP Chairman Lee Hae-chan was scheduled to visit Gangwon in the afternoon, as was Bareunmirae Chairman Sohn Hak-kyu.

Leaders of the Party for Democracy and Peace and the Justice Party said they will not visit the disaster-stricken area until after the fires are extinguished. They said they do not want to disturb the efforts to fight the disasters through such visits.