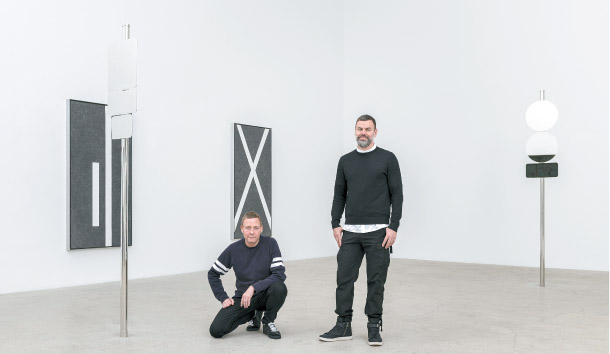 The artist duo Elmgreen & Dragset (Michael Elmgreen, left, and Ingar Dragset, right) with pieces from their “Adaptation” series and their “Highway Painting” series, which are part of their solo show “Adaptations” running at Kukje Gallery, central Seoul. [KUKJE GALLERY]

The road signs that carry neither text nor symbols for instructions but mirror the space around them; a circular bar whose stools are trapped inside the looped counter and are inaccessible from the outside; and a pair of torsos made of two different materials, whose places are switched with each other at intervals by two performers - these are part of the works by the artist duo Elmgreen & Dragset, now on view at Kukje Gallery, central Seoul.

The artworks can be visual poetry often involving performances, full of deadpan humor and simple, yet profound questions. It is no surprise that Michael Elmgreen, born 1961 in Denmark, started his artistic career as a poet and Ingar Dragset, born 1969 in Norway, studied the theater. The two artists, now based in Berlin, have worked together since 1995.

The Scandinavian duo is well known for “Powerless Structures, Fig. 101,” a satire about war monuments that was chosen as the winner of the Fourth Plinth Commission for London’s Trafalgar Square in 2011 and “Van Gogh’s Ear,” a large swimming pool standing upright set up at Rockefeller Center in New York in 2016 as part of the Public Art Fund’s projects. They also held a solo show titled “Aeroport Mille Plateaux” in the Plateau branch of the Samsung Museum of Art in Seoul in 2015.

In this solo show, titled “Adaptations,” Elmgreen & Dragset present sculptures, paintings and installations that seem to hover between abstract art pieces and the reproductions of everyday objects. The works raise questions about the relationship between the human body and the designs and architecture that surround us every day in social, political and historical contexts.

The Korea JoongAng Daily met with the artists late last month. The following are edited excerpts from the interview. 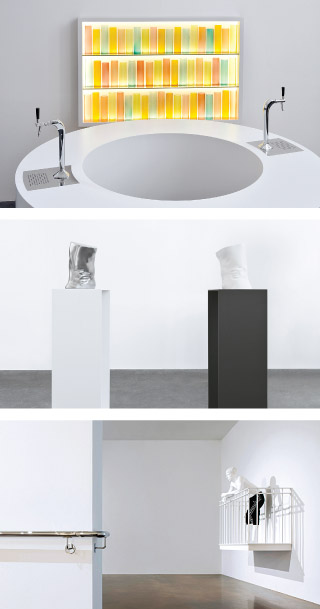 Q. Since when have you been interested in public designs and architecture that control our bodies?

A. Elmgreen: From the very beginning. We started with performances and when you do a performance, you [become] very much aware of the space and the features of the architecture where you do the performance. And one of our first sculptures was a diving board that was going through a window at the Louisiana Museum of Modern Art in Denmark. The base was inside the museum and the board was penetrating the window and reaching out to the sea, questioning what is a public space and what is an indoor institutional space.

In this show, we also have an architecture where a guy [wearing] track suit pants stands on a balcony. The balcony is between inside and outside. You wouldn’t be able to be undressed on the balcony - because of the rule that applies to the public space - even though the balcony is part of your private home.

And here, we deal with how our public spaces control our behaviors with road signs and all the lines on the streets. It’s kind of crazy that today we take it for granted; we don’t cross lines. But if you go back to 100 years ago, you didn’t have any of these. Yet today we behave like it is part of our history. At the same time, the lines on the street are actually the only truly global language. It’s the same no matter where you are in the world.

Dragset: In this exhibition, we have signs we call “Adaptations,” which is also the title of the exhibition. These signs - mirror polished stainless steel - almost camouflage themselves: they only reflect their surroundings and even mirror the people coming to the space. It’s almost utopian. Here we don’t have regulations and instructions, so people act in their own ways. It is, of course, impossible in reality, but it’s interesting to think about what if. We are also kind of skeptical about increasing rules and regulations. [It makes] people increasingly less responsible themselves. Now the regulations are coming to the internet, at least in the European Union (EU), which makes people think less individually.

Do you see more similarities or more differences in public designs when you travel around the world?

Elmgreen: [We see] more and more similarities between different parts of the world. Architecture looks quite similar in all big cities, such as Seoul, Hong Kong, New York and London. If you go to Gangnam, it looks almost like anywhere else in the world. Many of the new buildings are designed by so-called star architects who design buildings everywhere. And these cities are increasing rules and regulations in public spaces.

Dragset: This is related to what we are working [for] the Art Basel Hong Kong [which wrapped up on March 31], “The City in the Sky,” an imaginary city in the form of a scaled model, installed upside-down [so that the viewers can scan the inverted aerial view the urban space, which is imaginary but looks very familiar due to the similarities of the world’s metropolises.]

Elmgreen: Meanwhile, I think the 2016-17 protests to change the government [the candlelight vigil protests that helped oust former President Park Geun-hye] showed an amazing use of public space in Seoul. People here use public spaces in very intelligent ways; they made the very peaceful protests and even cleaned up [the streets] after the protests. It was one of the world’s best examples of how we can give our voice in public spaces, compared to the violent clashes seen in Paris recently.

Dragset: In general, it seems that there is active use of public spaces to express many different kinds of political opinions. It is very different from its neighboring countries, like China and Japan, which don’t have much voice in public spaces.

How would you explain your “Highway Paintings”?

Elmgreen: [The paintings were] inspired by early Minimalist paintings. But instead of oil on canvas, we have used the paint that is used to paint road markings and we have used rectangular pieces of asphalt as canvases.

Dragset: Low-end materials in a way are elevated into fine art materials.

Elmgreen: Our works look almost like ready-mades. But actually, everything we do is crafted. For example, the big swimming pool of “Van Gogh’s Ear” was actually sculpted. Our works look like a street sign, a swimming pool or a bar, but they are made as sculptures. In our lives, we get bombarded with signs, so we don’t really see it any more - in other words, we don’t think about what it is and what function it has. That’s why we like to take things from our everyday normal life and change them in order to rediscover them and discuss what they really are. 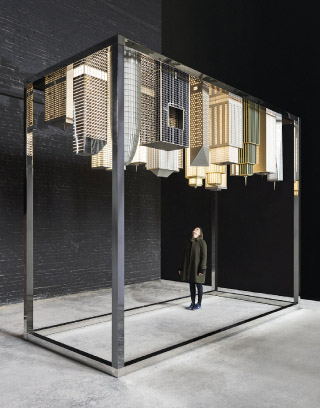 The installation work “City in the Sky” (2019) by Elmgreen & Dragset was presented in the Encounters section of Art Basel Hong Kong 2019, which was held late last month. [KUKJE GALLERY]

How about the two male torsos titled “The Influence, Fig. 1 and Fig. 2”? What do you intend by having two male performers change their places constantly?

Dragset: One thing is that an artwork is never finished - even a sculpture changes, depending on where it is, and is never the same one. Sometimes it becomes part of the narrative of a different story.

And another element is to put masculine bodies into an action that is very gentle and soft. The two male performers, when they carry the torsos with marks on their waists into each other’s place, should do it in a very caring way - in a very gentle performance. It has some feminist aspect.

All the works in this show, including the sculpture of an enlarged human tailbone, seem to be related to the human body, even though many of them look abstract at a glimpse.

Dragset: Yes, and our works have different levels of abstraction in this exhibition. The circular bar implies the absence of the human body and the handrail actually has human veins on it, becoming a bodily architecture and what looks like a sculpture in the style of Hans Arp is that of a human tailbone and then you have the man in the balcony.

Elmgreen: The tailbone is leftover from when we were animals. And it is part of our inner design. It is amazing we are all the same when we [look at our] skeletons. Some people are afraid of people who look different from them, but actually, they are exactly the same if you go in a little bit.

Meanwhile, we are interested in how we perceive our bodies today in a reality where we use so much of our time in virtual reality: we lose the sense of our bodies. For human identity, it is very important to be aware that you are here in a physical way, also in relation to public design and to architecture. So we are interested in where we come from and why we look like we do today - such as why we don’t have hair all over our bodies. That has very much to do with the title of the show.

Even our biology has been adapting to the different living situations of our history from doing manual works to living in virtual reality today. In Korea, with the high rate of plastic surgery, some people use their bodies as fashion extensions for self expression. It’s interesting that you suddenly want to even design your physical self in order to make some image that you have in your head.