[Debriefing] The wait is over. Are you ready for 5G?

[Debriefing] The wait is over. Are you ready for 5G? 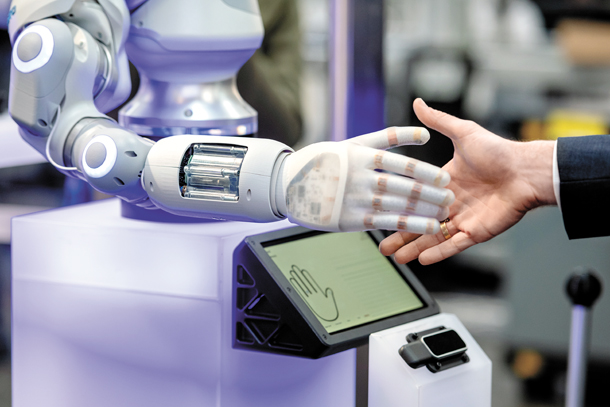 A Festo employee demonstrates the operation of a robot with a so-called BionicSoftHand at the Hannover Industry Fair in Hanover, Germany, on March 31. The focus of the Hannover fair was on artificial intelligence and the new mobile standard, 5G. [EPA/YONHAP]

Korea awoke on April 4 to the dawn of the much-ballyhooed 5G era.

After a dramatic last-minute push in the middle of the night, Korea became the first country in the world to commercialize a 5G network, beating Verizon in the United States by just 55 minutes.

On that first day, only a handful of celebrities and lucky honorees had access to the super-fast network. But one day later - last Friday, April 5 - the futuristic world of virtual reality (VR) entertainment, augmented reality (AR) phone calls, high-speed data transfers and flawless live streaming that had been promised for years was finally open to all - at least in theory.

Here are the basics of what 5G is, why everybody is so excited about it and whether it lives up to the hype.

5G literally means fifth generation. It’s the latest version of a cellular mobile network, succeeding the 4G LTE network that we have been using for about seven years. Unlike with other technologies, generational shifts in mobile networks tend to be dramatic, and the upgrade to 5G is expected to be especially so. As a result, 5G has become almost synonymous with innovation in a lot of industries including tech companies, mobile carriers and even carmakers.

The reason for all this excitement comes down to data speed. Once fully commercialized, 5G is expected to be about 20 times faster than the current 4G LTE network.

Q. Just how fast is that?

One hour of VR data eats up about 25 to 30 gigabytes of data - that’s more data than most people currently use in a month. 5G is fast enough to allow those services to operate seamlessly. In terms of video, the 5G networks that premiered last week are already fast enough that a user can download a 5-gigabyte 4K movie in as little as 15 seconds. That speed is only going to get faster as the networks are stabilized over the next few years.

Q. How does that compare to my current phone?

Assuming your current phone is on 4G LTE, 5G is supposed to be about 20 times faster. In practice, it could be a lot faster. According to Samsung, if downloading a 15-gigabyte ultra-high-definition movie takes about four minutes on 4G, it will take six seconds on 5G.

But it’s not just about downloading the latest Marvel film at super-fast speeds - step away from the phone and there’s a lot more that 5G can do. It’s not only speed that the new networks will bring to the party. Their low-latency delivery of data will be very important for self-driving cars, robotic surgery and other technologies where a delay in data transfers could quite literally be a case of life or death.

Today, latency - the delay between your phone requesting data and it arriving - is about 0.03 to 0.05 seconds on 4G, meaning a self-driving car moving at 100 kilometers per hour (62 miles per hour) would move at least 81 centimeters (31 inches) before a remote braking signal reaches the vehicle on 4G. With 5G, latency will be down to 0.001 second, or just 3 centimeters for that autonomous car. 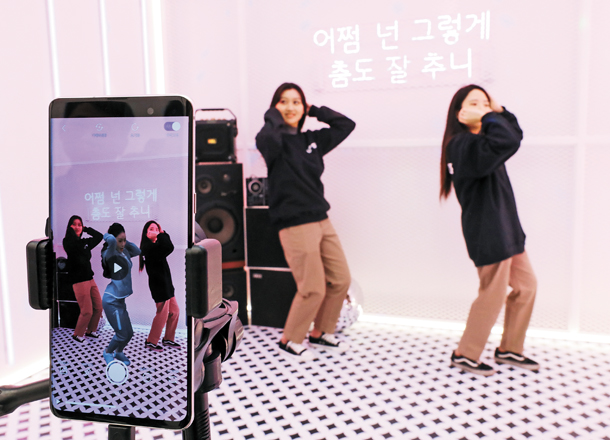 LG U+ employees demonstrate a 5G service where a digital image of K-pop dancer and singer Chungha shows up at a pop up store in Seocho District, southern Seoul, on April 1. [NEWS1]

Q. O.K., I’m convinced. So when will my current smartphone switch over to 5G?

It won’t. New networks require physically different hardware. Your existing phone is never going to be able to connect to 5G, so in order to access the super-fast network you’re going to need to invest in a new device.

Currently, the only 5G phone on the market is Samsung’s Galaxy S10 5G. Next week, LG’s V50 ThinQ 5G will also be available. Both phones contain two separate antennae. One antenna is similar to the one found inside 4G LTE phones and is used to pick up that signal; the other receives 5G signals.

While the phones will try to use 5G wherever they can, such as in the greater Seoul area where 5G infrastructure is already in place, they will be able to revert to 4G LTE when the 5G connection is weak or nonexistent.

The Galaxy S10 5G, for instance, comes with a 6.7-inch display and a 4,500 milliampere hour battery. The screen is larger than the 4G Galaxy S10 and 0.3 inches bigger than Samsung’s flagship phablet, the Galaxy Note9. The battery has a larger capacity than other Galaxy S10 phones. Bigger batteries are necessary as heavy data consumption for games, movies and VR content uses up large amounts of power.

5G technology doesn’t come cheap. Both the Samsung and LG devices cost about 200,000 won ($176) more than their non-5G counterparts. 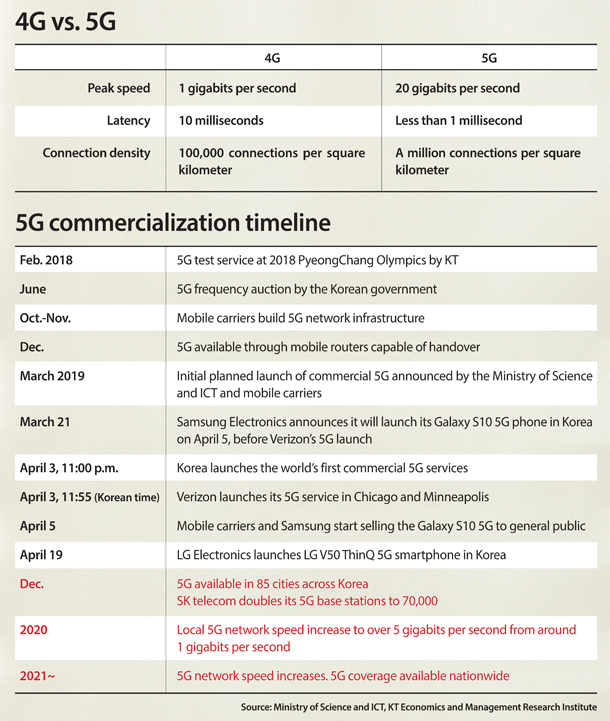 Q. What about the infrastructure - how do you upgrade a phone network?

Your smartphone isn’t the only thing that needs to be replaced for 5G to work. Completely new networking equipment has to be installed, and this process is by no means complete even though as the network is commercialized.

For 5G to work, each carrier needs to install new base stations.

The areas they cover are mostly concentrated in Seoul and surrounding areas, especially in areas that see a lot of traffic like shopping complexes, KTX stations and airports. This means that 5G could end up being but a distant dream, at least for the time being, for people who live in more rural areas. SK Telecom and KT have built some base stations in other metropolitan cities like Busan, Daegu, Incheon and Gwangju, but LG U+ only had them in Seoul, Incheon, Gyeonggi and Daejeon as of late last month.

To make things worse, 5G requires more base stations than LTE because of its high frequency range and shorter wavelength, making the signal more vulnerable to degradation from longer distances and obstructions within the coverage area. Thus, phones that can also pick up 4G will be required for a while.

In case you haven’t been reading the newspaper, 5G went live in Korea at 11 p.m. on April 3, Wednesday.

That wasn’t the original plan. 5G was meant to be commercialized on April 5, when the Samsung Galaxy S10 5G went on sale, but that all changed around 5 p.m. on April 3 when the government found out that U.S. carrier Verizon was secretly planning to launch its 5G service with Motorola’s 5G-upgradable phone Moto Z3 later that day - a week earlier than its publicly announced launch date, April 11. After a quick discussion among the mobile carriers, Samsung and the Science Ministry, Korea planned its own surprise launch later that night.

But for the first day and a half, only celebrities and hand-picked honorees who had been presented with pre-release versions of the Galaxy S10 5G by the mobile carriers were able to access the network. On April 5, the Samsung phone went on sale as planned and 5G was open to all.

Q. Is Korea the only country with 5G?

No. Verizon has commercialized 5G in Chicago and Minneapolis, so some users in the United States have access to 5G.

Korea is, however, the only country with a 5G phone. The Galaxy S10 5G is currently only available here, meaning that practically speaking, Korea is the only country that has a widely accessible 5G network. Users in the United States have to buy a separate modem attachment that plugs into a Motorola Moto Z3.

Q. Do we have any idea how many people are actually using the 5G network already?

Q. Should I be rushing out to buy my first 5G phone today?

With prices ranging from 80,000 won to 130,000 won for unlimited plans with different benefits, 5G phone plans don’t come cheap, but they’re not wildly more expensive than unlimited plans of the past. Subscribers can enjoy a range of benefits including free roaming, free data for a second device and access to exclusive VR content and games.

Big fans of gaming or VR and AR enthusiasts might be eager to switch over to 5G, but they should be aware that a lot of that content is not ready yet. That said, all three carriers do have some apps already available offering content that is exclusive to 5G, so early adopters won’t be left completely empty handed.

Both SK Telecom and LG U+ are also offering better deals for customers who subscribe to their 5G price plans before the end of June, so there are benefits to getting in early.