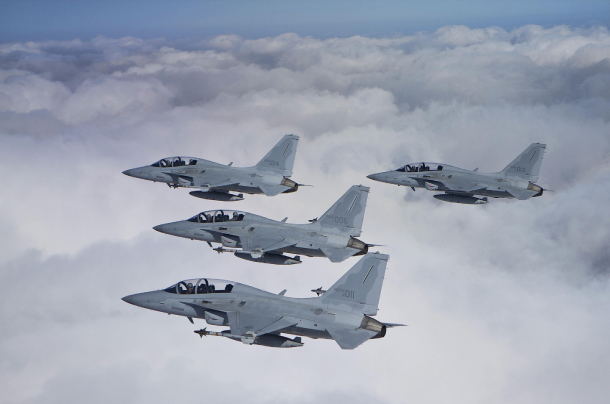 A fleet of FA-50 light-attack fighters on a flight mission in an Air Force photo. [YONHAP]

The FA-50 is a light-attack fighter based on the design of the T-50 trainer jet manufactured by the Korea Aerospace Industries (KAI), the country’s sole aircraft maker.

Armed with AIM-9, AGM-65G and other missiles, the plane can conduct air-to-air and air-to-ground operations.

Also built by KAI, the KA-1 is based on the KT-1 trainer plane. It carries a 12.7 millimeter cannon and other weapons, and mainly conducts close air support missions designed to provide firepower for troops on the ground.

“I take great pride in the fact that we train and defend our territorial air with indigenously built aircraft,” an Air Force operator of the FA-50 was quoted as saying in a press release.

The 8th Fighter Wing was first launched as the 8th Tactical Air Control Wing in 1979. It got its current name in 1988.

The 237th Tactical Control Squadron used to belong to the 15th Fighter Wing, but the Air Force put it under the 8th Fighter Wing in 2012. In December, the squadron achieved 160,000 hours of accident-free flight.