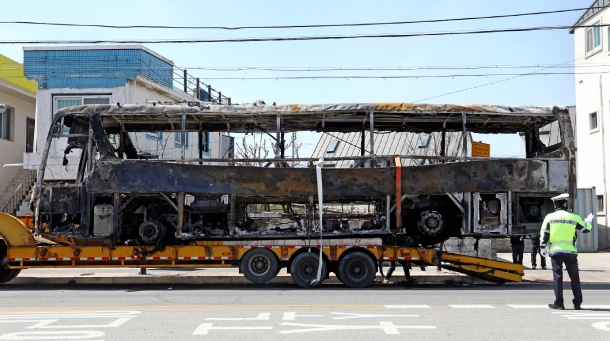 A bus burned in the wildfire that ravaged Sokcho, Gangwon, from Thursday to Friday is transported on Sunday afternoon. [NEWS1]

Authorities investigating the wildfires in Gangwon that started Thursday and burned at least 400 houses and 2 square miles of land suspect they began at three separate locations on Thursday.

The first spark came at around 2:45 p.m. on a hiking trail in Inje County. The fire spread quickly in strong winds with speeds up to 6.5 meters per second (14.5 miles per hour) and moved into residential areas.

Around 95 residents in the area were evacuated. As firefighters fought the blaze near the residential areas, the fire burned through 30 hectares of forests before it was put out around noon on Saturday, according to the Korea Forest Service.

The cause of the spark on the hiking trail is being investigated.

“We have not ruled out the possibility of a fire caused by an accident,” said a police officer.

The second spark in Gangwon on Thursday came at around 7:17 p.m. on an electric wire connected to a power switch at a gas station in Goseong County.

The state-run Korea Electric Power Corporation (Kepco) said Friday that the fire seemed to have been sparked when “an alien substance” blown by the wind caught on an electric wire connected to a power switch.

The fire that began from spark spread quickly due to the wind, blazing through 250 hectares of the county and Sokcho area before it was put out Friday afternoon.

“We think it is likely that an alien substance, flying in strong winds, that hit the electric wire,” said Kim Chae-hyun, head of the Sokcho branch of Kepco. “Through this force, the wire could have been cut, causing the sparks to fly and catch fire in the vicinity.”

Authorities are investigating Kepco’s management of the electric poles and wires in the area.

In a similar case in the United States, Pacific Gas & Electric Company admitted that its equipment sparked the most destructive wildfire in California in November last year. The company filed for bankruptcy in January.

The third spark in Gangwon on Thursday is suspected to have came around 11:46 p.m. in a small town in Gangneung. The fire blazed through Gangneung and Donghae, burning some 250 hectares of forests and land, before it was put out Friday afternoon.

Police are investigating a temple in the town as the starting point of the fire.

They found four altars at the temple, one of which was burned black, and candles on the altar. The temple is run by a man in his 80s who lives with his wife and daughter nearby.

“The man was the one who called the fire department after finding the fire,” said a police officer. “He said he could not check if the altar near his home had lit candles on it before the fire and that he does not know how the fire began.”

The National Forensic Service investigated the area on Saturday to determine where the fire began.

All fires in Gangwon were put out as of Saturday afternoon. This was not before they burned through 401 houses, 77 warehouses, 158 camping sites, 925 farm, 100 buildings and 241 tractors and other agricultural machines, according to the Ministry of the Interior and Safety.

A man in his 50s died in the fire in Goseong County.

The fire displaced up to 4,000 people over the night from Thursday, but many returned home and 722 people remained at temporary shelters in Gangwon as of Sunday morning.

“These areas will receive active support in reconstruction and recuperation efforts from the government, and they include human and material resources,” said Moon’s deputy press officer, Ko Min-jung, in a press release.

This is the sixth time the Moon administration has announced a special disaster zone. Residents of the zone receive special financial, administrative and medical support.

Korea Forest Service announced Sunday that it will focus on reforesting the areas to prevent secondary damage in the coming monsoon season in the summer. Areas ravaged by wildfire are more prone to landslides under heavy rain.

This is a long-term, costly project.

“Just looking at the wildfire in Samcheok, Gangwon, in February last year that burned through around 270 hectares of land and forests, it would take some 20 years before the burned forest returns to its former look,” said Han Chang-sul, head of the forestry resources department of Korea Forest Service. The reforestation after a wildfire in Yangyang, Gangwon, in 2005, that blazed through some 1,200 hectares of forests, cost around 18.9 billion won ($16.6 million).

The provincial government currently only owns two rescue helicopters. “If Gangwon has some firefighting helicopters on site, we can respond faster to wildfires,” said Gangwon Gov. Choi Mun-sun.

The national fire department dispatched 14 helicopters to Gangwon on Friday morning to fight the wildfires. The Korean military dispatched an additional five helicopters to the area and the U.S. Forces Korea sent another four.