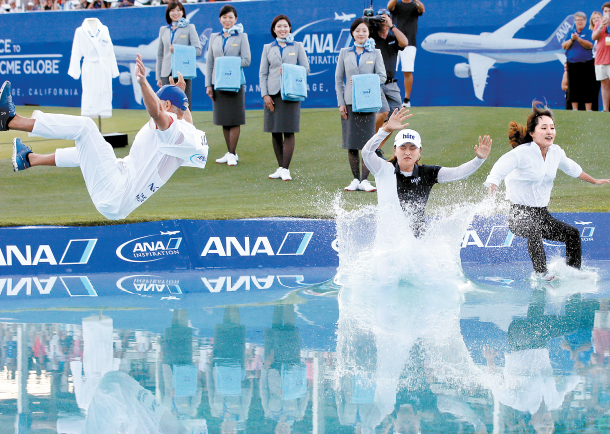 Ko Jin-young, center, jumps into Poppie’s Pond with her caddie, left, and her manager after winning the ANA Inspiration at Mission Hills Country Club in Rancho Mirage, California, on Sunday. [AP/YONHAP]

Ko Jin-young is the winner of this year’s ANA Inspiration, the first major tournament of the season on the LPGA Tour.

With five birdies and three bogeys, Ko shot two under par, 70, on the final day to finish three shots ahead of fellow Korean golfer Lee Mi-hyang.

Ko’s bogeys on the par-4 13th and par-4 15th allowed Lee to get behind by only one shot, but that didn’t affect her game much in the final round. Right after her bogey, Ko quickly made it up with a birdie on the par-4 16th to extend her lead by two shots.

Although Ko only needed a par to win the tournament, she still finished her round in style, finishing the last hole with a birdie to pick up her first major title on the LPGA Tour and her second win of the season.

“I won the tournament and that’s a happy moment,” Ko was quoted as saying on the LPGA website. “I thank God, I thank my parents, I thank my grandparents. It is an honor for me to join so many great Korean players. I’m honored to be here.”

Ko’s victory allowed her to become the fifth Korean golfer to have jumped into the course’s famous Poppie’s Pond. Every year, the champion of the ANA Inspiration jumps into Poppie’s Pond, a part of the Champions Lake that surrounds the 18th hole on the course, with their caddie and family.

After a successful weekend, Ko didn’t forget to thank her caddie, David Brooker. Brooker is a veteran caddie who has carried bags at the ANA Inspiration 16 times. This was his third time on the winning team at the tournament, following victories from Grace Park in 2004 and Lorena Ochoa of Mexico in 2008.

“He knows this course,” Ko was quoted as saying on ESPN. “He helps me all the time on the course. So [I] really [want to] say thank you for my caddie.”

With the win, Ko took home $450,000 in prize money. A win is also expected to give Ko another bonus, a chance for her to be the new No. 1 in the world ranking. Yet for Ko, numbers are just numbers.

“I just try to focus on my game on the course,” Ko was quoted as saying. “It doesn’t matter about the world ranking. I don’t like numbers like No. 1 or No. 2. I’m just playing on the course.”

Although the majority of golfers still take the flag out when putting on the green, Ko has chosen to putt with the flag left in in most tournaments this season.

Once again, throughout the ANA Inspiration, Ko putted with the flag left in.

Ko, who turned professional in 2013, joined the LPGA Tour after a successful career on the KLPGA Tour where she won nine tournaments over four seasons.

Throughout the 2016 season, when world No. 1 Park Sung-hyun dominated the KLPGA Tour by winning six tournaments, Ko was considered her biggest competition, winning a total of three. When Park moved to the LPGA Tour, Ko was considered the player to beat in the KLPGA.

The 2017 season was another solid one for Ko, as she won two tournaments on the KLPGA Tour. Once the 2017 KLPGA Tour season ended, Ko earned her LPGA card by winning the KEB Hana Bank Championship as a non-member in October 2017.

Ko’s second season has proven even more dominant than when she was a rookie. Before the ANA Inspiration, Ko picked up her first win of the season in March at the Bank of Hope Founders Cup in Phoenix. Although Ko has already won three LPGA Tour events, her victory in March was the first tournament that she has won in the United States.

In six tournaments so far this season, Ko has had five top-three finishes and worse finish tied for 29th at the Honda LPGA Thailand on Feb. 21.