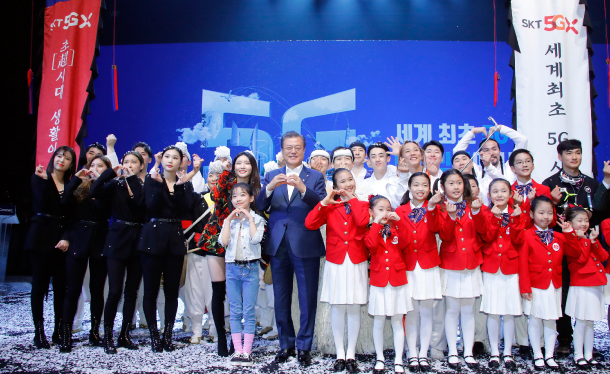 Days after Korea became the first country to commercialize a 5G network, President Moon Jae-in announced a government plan to create a 180 trillion won ($157.4 billion) market by 2026 through the use of the next-generation network.

At a ceremony commemorating the launch of 5G at the Olympic Park in southern Seoul on Monday, Moon vowed to develop the country as a global leader in the network and outlined a series of support measures to develop emerging industries and services that will incorporate the network.

“The government is pursuing a 5G strategy to create the world’s best 5G environment,” said Moon.

Korea introduced the super-fast network on April 3. 5G opens the door for technologies that rely on large amounts of data being transferred at fast speeds with minimal latency, such as allowing self-driving cars to receive real-time sensor and traffic information.

Globally, 5G-related industries are expected to be worth 1,161 trillion won by 2026. China is currently preparing a testing environment for the new network at 30 cities.

In a bid to overtake other countries in 5G network development, the government said it would increase tax support, create a test bed for 5G services among other measures to develop five new services and 10 emerging manufacturing industries.

The government will provide tax credit support of 2 to 3 percent for 5G network investment until next year and has developed a 5G facilities investment program worth 10 trillion won through state-run banks until 2021. It has also created a 15 trillion won fund to support promising 5G-related start-ups.

Areas in Sejong and Busan have also been designated as smart cities that will operate under artificial intelligence data centers that incorporate the new network. The government plans to use the smart cities as test beds for new 5G services.

The government also expressed its commitment to net neutrality, a principle in which internet service providers treat internet communications equally and without discrimination, while adding that technological development will be prioritized.

Support for small to mid-size companies will also increase with plans to integrate 5G network solutions such as cloud services to 1,000 factories run by smaller companies until 2022.

The president expressed hopes that the new network will also lead to more jobs.