5G big, but some phone rebates too big

5G big, but some phone rebates too big 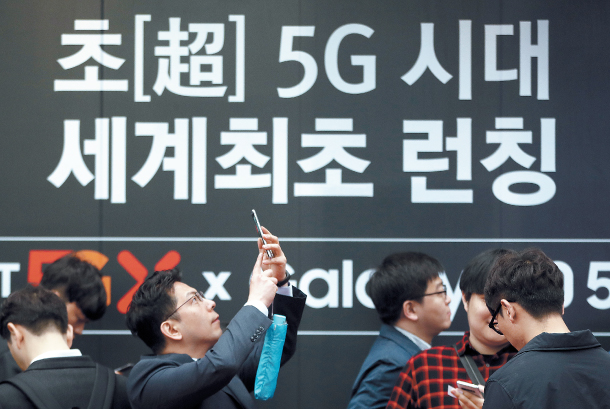 5G has started out strong, with the number of subscriptions approaching about 100,000 in the first few days, but the only phone that works on the network is already being heavily discounted by retailers.

The special deals could in some cases violate the law.

KT, the country’s second largest carrier, reported more than 30,000 5G subscribers by Saturday at 5:50 p.m. LG U+ said it had 25,000. SK Telecom, the largest mobile carrier, didn’t disclose figures, but may have as many subscriptions as KT.

At the moment, the Galaxy S10 5G is the only 5G-capable phone available. It has been selling well since it became available on Friday.

Retailers are reporting high demand for the device despite limited service and some complaints about service quality. One in central Seoul said that the silver model is nearly sold out and that it may take some time to restock.

The three carriers also embarked on a promotional battle in offering rebates to customers that shift mobile carriers when changing their phones. On Friday, SK Telecom said it would be offering a rebate of up to 546,000 won, up from the original 220,000 won.

A day earlier, LG U+ also reported to the Korea Communications Commission (KCC) that it would offer rebates of up to 475,000 won.

“All mobile carriers at the moment are pushing efforts to take the lead in 5G, hence the affordable phone plans and the promotions,” said an anonymous source from a local mobile carrier.

In the past, mobile carriers have offered significant promotions as new service were introduced, such as in the shift from 3G to 4G LTE.

But the jump to 5G is seen as more significant.

“I think the promotional drive from mobile carriers pushed customers who would have been on the fence about buying a S10 5G without the benefits,” the source said.

Competition may be heating up to a point phone where phone shops are offering illegal kickbacks in order to win customers.

In Korea, phone retailers are not allowed to provide rebates of a higher won value than what’s offered by the mobile carrier.

On Sunday, a phone seller at Techno Mart in Sindorim-dong, western Seoul, offered a JoongAng Ilbo reporter a discount of up to 869,000 won for a Galaxy S10 5G on the condition they move to another provider. The S10 4G model was offered with a 140,000 won discount.

The 5G phone was actually cheaper.

“The practice seems to be a misconduct of a few stores, but if it spreads to be universal we’ll review the illegality and set out to sanction such actions,” said Kim Yong-il, a KCC official of the handset retail investigation team.

The S10 is selling better than the Galaxy S9. Samsung Electronics President Koh Dong-jin, who oversees the company’s smartphone business, sent an email to Galaxy S10 users around the world on Monday, thanking them for making the purchase decision.