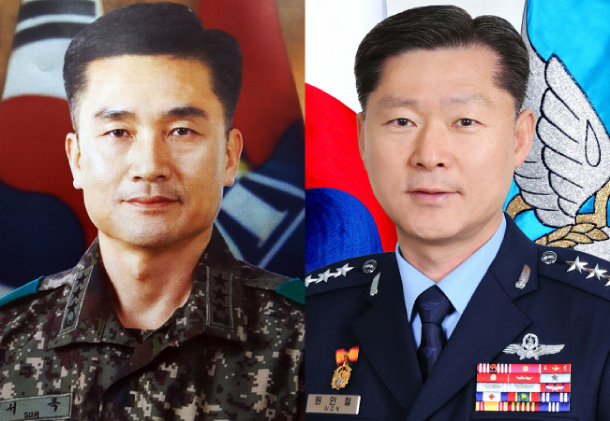 South Korea replaced its Army, Air Force and Marine Corps chiefs in a regular reshuffle of top officers on Monday as the military seeks to maintain robust readiness amid peace efforts with North Korea.

The Defense Ministry said that Lt. Gen. Suh Wook, chief director of operations at the Joint Chiefs of Staff (JCS), was tapped as the new Army chief of staff to replace Gen. Kim Yong-woo, who has led the armed service since August 2017.

Lt. Gen. Won In-choul, the vice JCS chairman, was named to head the Air Force in place of Gen. Lee Wang-keun, who was also appointed to the top post in August 2017. Maj. Gen. Lee Seung-do, commander of the military readiness inspection group at the JCS, was named the Marine Corps commandant to replace Lt. Gen. Jun Jin-goo, who has served in the post since April 2017.

Suh, the Army chief designate, boasts extensive experience and expertise in military operations, as he has led a series of field Army units since he was commissioned as a second lieutenant in 1985. He formerly headed the Army’s 1st Corps and 25th Division.

Observers said that the decision to put him in the top Army post was made in consideration of Seoul’s efforts to retake wartime operational control from Washington.

Commissioned as a second lieutenant in 1984, Won is also well-versed in air defense maneuvers. He previously led the Air Force Operations Command and the JCS military support division.

Won has been heavily involved in the current government’s push for defense reform aimed at creating a smaller, yet smarter military based on technological advancements, and in the enforcement of last year’s inter-Korean military accord aimed at defusing border tensions and building trust.

The government also appointed Lt. Gen. Choi Byung-hyuk, the vice Army chief of staff, as the deputy commander of the South Korea-U.S. Combined Forces Command, and Lt. Gen. Nam Young-sin, the chief of the Defense Security Support Command, as the head of the Ground Operations Command.