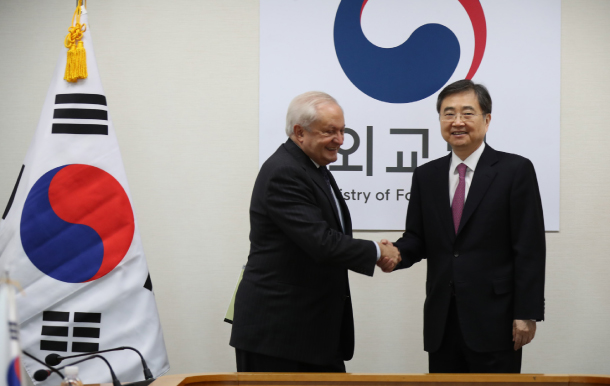 The Korean Ministry of Foreign Affairs came under fire for displaying a wrinkled Taegukgi (Korean flag) during strategic talks with Spain last week, leading to the official in charge being dismissed from his post Monday.

The large Korean flag at the event had distinct pleated wrinkles across its entire area. The Spanish flag was not wrinkled.

Photographs and videos showed two officials frantically trying to smooth out the Taegeukgi with their hands just ahead of the event to no avail. Cho and Valenzuela eventually shook hands and took commemorative photos next to the wrinkled flag. This caused public backlash, as the wrinkled Korean flag was seen as reflecting careless preparation and a poor immediate response from those in charge.

Officials said that the flag became wrinkled in the storage process after it was cleaned. But as the event took place in the Foreign Ministry, there would have been other Korean flags readily available from other departments. The South Korea-Spain talks garnered special interest because they followed the raid and robbery of the North Korean Embassy in Spain in February.

Earlier Thursday, Foreign Minister Kang Kyung-wha in a meeting with officials said, “As is the nature of diplomatic affairs, not one mistake can be afforded,” urging them to “carry out tasks immaculately.”

On Sunday, the Foreign Ministry reached the swift decision to remove the official who was in charge, which is seen as recognition of the serious nature of diplomatic protocol and the need to take responsibility for displaying a wrinkled flag. It is rare for an official to be dismissed so swiftly from a post without an audit or investigation, especially over protocol matters. Thus, it is likely that the dismissal came under the minister’s orders.

The ministry will also conduct an internal audit into why such a mistake was made. This official is expected to report for duty at the ministry’s headquarters for the time being.

This comes after a series of embarrassing mistakes made by the Foreign Ministry, including incorrectly describing the three Baltic states - Latvia, Lithuania and Estonia - as “Balkan” in an English press release posted on its official website on March 19, which resulted in criticism from the Latvian Embassy in Seoul. The press release has since been corrected.

On March 13, President Moon Jae-in used an Indonesian greeting during a joint press conference with Malaysian Prime Minister Mahathir Mohamad, leading to criticism of his protocol team for failing to prepare him properly. Foreign Minister Kang in a meeting on March 22 emphasized the importance of “professionalism” and the need to “take responsibility from beginning to end in form and matter in diplomatic affairs.”